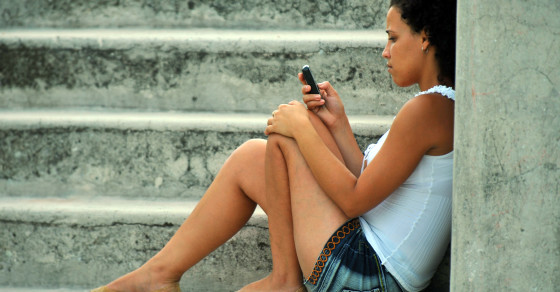 Unemployment Is Linked To Decrease In Cellphone Use
By Jennings Brown

Unemployment Is Linked To Decrease In Cellphone Use

If you don’t have a job, you may be using your cellphone less, and that’s preventing you from getting a job (where you’ll use your phone more), according to a new study.

A  paper published in the Journal of the Royal Society Interface co-authored by MIT and Harvard researchers analyzes the change in communication patterns in a European country affected by great economic disruption, as well as a European town that lost seven percent of its workforce after an automotive plant laid off 1,100 employees in 2006. Results showed people use their cellphones 51 percent less during the several months after losing a job.

“Individuals who we believe to have been laid off display fewer phone calls incoming, contact fewer people each month, and the people they are contacting are different,” Jameson Toole, a PhD candidate in MIT’s Engineering Systems Division, and a co-author told MIT News.

Toole also says this behavior could exacerbate the problem. “People’s social behavior diminishes, and that might be one of the ways layoffs have these negative consequences. It hurts the networks that might help people find the next job.”

Though the results might be different in a modern American metropolitan city, it’s clear that people’s cellphone usage changes when they are no longer commuting to the same job every day. The paper recommends this method be used to compliment current tools for analyzing unemployment.