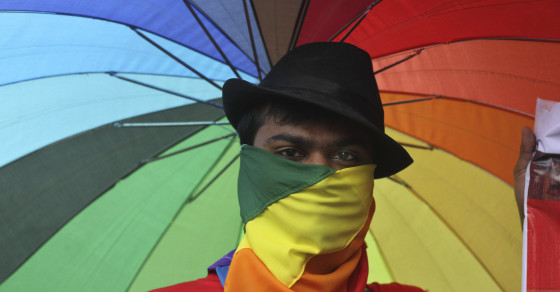 The hashtag #INeedStraightPrideBecause has gone viral over the past 24 hours, with over 35,000 tweets worldwide. The hashtag offers a light-hearted way for anyone — straight allies and queer users alike — to support the grassroots LGBT+ campaigns rippling across social platforms, from Instagram to Tumblr.

Rather than take offense or ignore homophobic reactions to the youth campaigns, a Twitter account called Straight People started the new sarcastic hashtag to reclaim the conversation.

“Straight People” is run by a group of queer European teenagers, ages 13 to 18. One of the admins, a Spanish lesbian who goes by Maggie, says that connecting with the elusive network of queer bloggers behind these campaigns has changed her life.

“I think none of us are out of the closet and maybe we are a bit afraid of people harassing us,” she said. “Here we don’t really have much education about gender/sexuality stuff, and if it wasn’t for the online communities and the information I’ve been able to access I would never have figured it out.” For Maggie, using anonymous social media accounts allowed her to safely explore her identity.

The Straight People accounts receive around five questions a week, via private messages, from queer youth around the world who don’t know of another safe space to turn for guidance. Others use social media to come out publicly by posting selfies during June’s hashtag days.

“For me, lesbian visibility day was great,” she said, “we got to show none of us look alike and we are so diverse.”

Over a dozen grassroots hashtag campaigns are taking place during Gay Pride Month, highlighting queer diversity, including lesser-known identities like agender and pansexual, while connecting queer youth around the world.

#INeedStraightPrideBecause gay couples can be injured/killed for PDA, but i get dirty looks for making out with my girlfriend in public :(((

#INeedStraightPrideBecause otherwise I would question my sexuality and that sounds scary, bro.