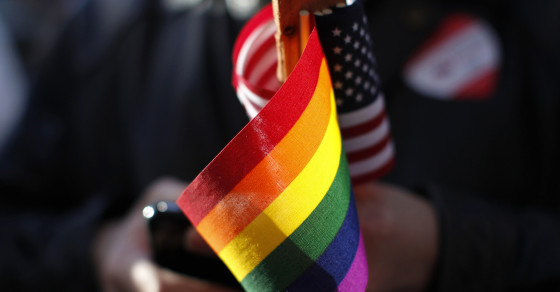 Protecting the right to same-sex marriage across the country could boost the economy by a staggering $2.6 billion in the first three years alone, thanks to couples rushing to the altar and opening their checkbooks in all 50 states.

The Supreme Court on Friday handed down a 5-4 decision in the case of Obergefell v. Hodges that would legalize same sex marriage nationwide.

A whopping $184.7 million in tax revenue and 13,058 jobs would also be added to states’ economies in the first three years of same-sex marriage being made a federal right, according to a report released by the Williams Institute in the lead up to the landmark Supreme Court ruling on whether couples have a right to marry each other regardless of their sexual orientation.

The 13 states where gay marriage was still banned would see $546 million pumped back into their economies from spending on same-sex weddings during the first three years of gay marriage being legal. These states have missed out on a combined total of $26.7 million in tax revenue for every year of their same-sex marriage bans, according to the Williams Institute, and represent roughly 29 percent of the potential economic benefit that same-sex marriage as a federal right would yield.

Of the states yet to legally recognize same-sex unions, Texas has the most to gain. If marriage was opened to same-sex couples, the estimated economic impact in the Lone Star state would equal $14.8 million in tax revenue, and the total spending on gay weddings in the state would pour an additional $181.6 million into the Texas economy over the first three years, says the report. Texas would instantly be launched into the top five states with gay wedding economies. Despite this, however, there are many Texas lawmakers working tirelessly to prevent the legalization of gay marriage in the state. The state has a constitutional amendment restricting marriage to one man and one woman and just last month, a bill was introduced to the Republican-dominated Texas House of Representatives known as the Preservation of Sovereignty and Marriage Act. Texas democrats were able to run out the clock on the bill, it is just one of more than 20 measures introduced this session that discriminate against the LGBT community. 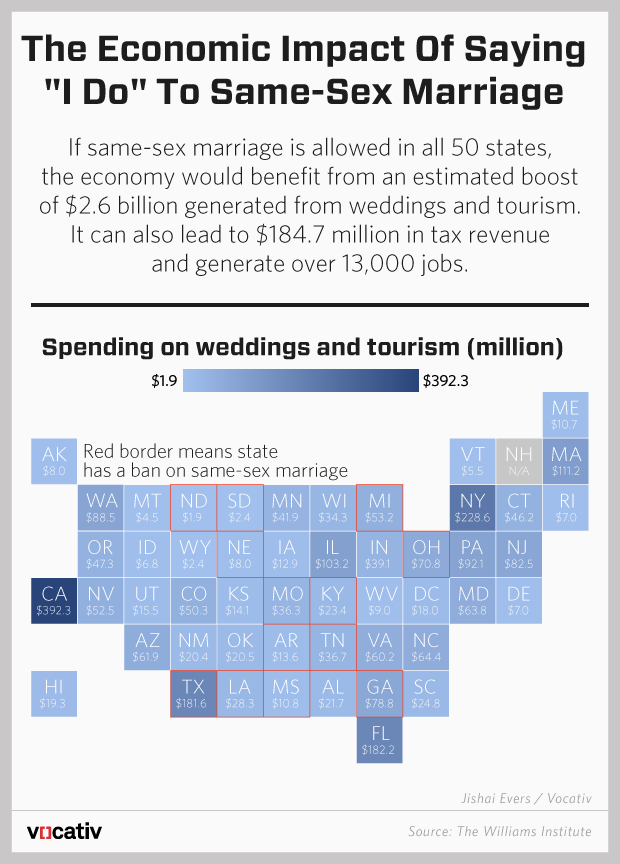 California and New York lead the states in reaping the benefits. In New York, which passed the Marriage Equality Act back in 2011, the inclusion of same sex couples in the institution has added $228.6 million to the economy, by way of the wedding industry and $19.4 million in tax revenue in the first three years. Compared to California, however, that is a pretty paltry sum. Based off early estimates, tax revenues in the Golden State from same-sex marriage hit $31.4 million and spending on weddings in the state would yield $392.3 million back into the economy.

Same-sex marriages are legal in 37 states and in each lucrative economies have cropped up in the wake of their legalization. New York City alone profited off gay marriage to the tune of $259 million within the first year of the law allowing them. The city issued 8,200 gay-marriage licenses and more than 200,000 guests flocked to the city to attend same-sex wedding ceremonies and booked more than 235,00 hotel rooms in the first year after legalization.

Editor’s note: A previous version of this story said that the 13 states where gay marriage was banned would see $364.2 million pumped back into their economies. That dollar amount excluded Texas. The correct amount is $546 million, which includes Texas.