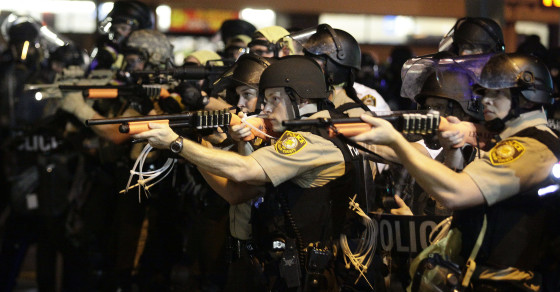 The rate of fatal police shootings in the U.S. is on track to top all gun-related murders committed in a majority wealthy, developed countries, data shows

It’s no secret that the United States has the most gun-related killings, per capita, among developed nations. It turns out, however, that if you take America’s criminals out of that equation—and count just fatal shootings committed by law enforcement officials—the U.S. would still have a firearms-related murder rate that tops the majority of these countries, an analysis by Vocativ shows.

With at least 385 men and women fatally shot by cops this year, police in the U.S. are projected to kill almost 1,000 people by the end of 2015. That number alone puts America’s police force on track to kill more people with guns per capita than the number of all firearms-related homicides committed per year in 19 of the 34 countries that belong to the Organization for Economic Cooperation and Development.

The projected fatal police shooting figure would also be higher than the number of all murders committed throughout France (777), England (602) and 28 other developed countries in 2013, according to statistics compiled by the United Nations Office on Drugs and Crime.

Here’s a breakdown of the numbers, excluding figures from Russia, Brazil and Mexico, whose homicide numbers were so large as to make the rest of the chart unreadable if they were included.

What 16 months of police killings in the U.S. looks like (Vocativ)
Fatal police shootings in 2015 approaching 400 nationwide (Washington Post)
15 facts about gun violence that will have you wearing orange (MTV)