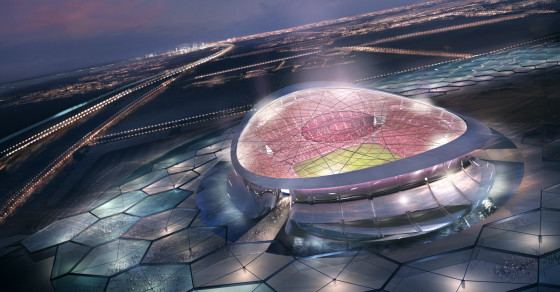 Workers building the Qatar's Lusail Iconic Stadium for the 2022 World Cup earn about $7.50 a day, while FIFA is expected to make billions from the event

For every VIP seat set to be built in Qatar’s main soccer stadium for the 2022 World Cup, nearly two migrant workers are likely to die.

Qatar’s Kafala migrant worker program—dubbed a form of modern-day slavery by some human rights groups—provides most of the labor currently constructing the country’s Lusail Iconic Stadium, which calls for 2,160 VIP seats in what is expected to be a 86,250-seat stadium. These seats undoubtedly will be reserved for FIFA executives—those who still have their jobs after the stunning indictment of several officials on public corruption charges Wednesday—and some of the wealthiest people in the world.

The average pay for the migrant workers building the stadium is roughly $7.50 a day, according to a 2014 report from the International Trade Union Confederation. Based on current trends, the ITUC estimates that more than 4,000 migrant workers will die before the structure is complete given the unsafe working conditions.

In the report, entitled “The Case Against Qatar,” the ITUC explains that the 4,000 figure is based on data from the Indian and Nepalese embassies—the native countries of the majority of Qatar’s migrant workers—that shows there have been 1,356 work-related deaths since 2010. “Whether the cause of death is labeled a work accident, heart attack (brought on by threatening effects of heat stress) or diseases from squalid living conditions, the root cause is the same—working conditions,” the report states.