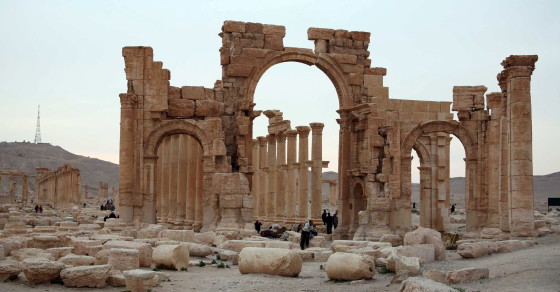 The new video showed the ruins of the 2,000-year-old city still untouched by ISIS, despite fears of its destruction

News out of Palmyra, the central Syrian city overrun by ISIS last week, has come in a trickle, and most of it conflicting. The Syrian government’s media arm reported that ISIS has executed dozens of civilians, while a human rights group says that Damascus inflicted punishing airstrikes on the ancient city, killing several civilians.

Vocativ has obtained at least two videos from the region Wednesday, including one purported to be broadcast by a pro-ISIS news agency.  The video from Amaq, showing scenes from inside the city of Palmyra, claims to have been filmed after the ruins were captured by ISIS. The video, however, doesn’t feature any ISIS symbols or fighters.

The second features a video posted by Syrian opposition channel Syria24, of activists reportedly evacuating artifacts from Palmyra before ISIS arrived. In the 40 second clip, several statues are seen piled onto the back of pickup trucks. The head of the Damascus department of antiquities said last week that artifacts once housed in the town’s museum have been taken away and were safe.

Translation: “Video showing soldiers of the Syrian army moving ancient artifacts before the entrance of ISIS to the city”