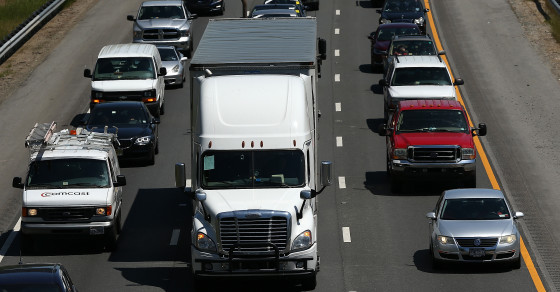 Memorial Day is all about relaxing, eating too much BBQ and sitting in traffic. But according to a couple of Swedish scientists, it’s the traffic that’ll really take a toll on your waistline—not because you can’t workout in excruciating bumper-to-bumper, but because road traffic noise makes people fat.

Researchers collected diabetes data on 5,075 people living in suburban and rural Stockholm back in 1992, and held onto it for a rainy day—a rainy day that arrived when a team of Swedish scientists decided to rifle through the old data to find correlations between noise pollution and obesity. And they were not disappointed: The study reveals a shocking 0.08 inch increase in waist size for every 5 decibels of exposure to traffic noise.

This study would be too ridiculous to cover if it wasn’t published in the British Medical Journal—widely considered one of the Big Five Medical journals. Still, after reviewing the data, I’m thinking we should downgrade BMJ to Big Six.

Now, even the authors admit it’ll take repeated exposure to road traffic noise—the sort of thing that could interrupt your sleep schedule and cause stress—to land a little extra love around your midriff. But even if you literally live beneath a highway (or you’re stuck in a traffic jam that feels like it’ll last forever) there are several good reasons to ignore this particular study. It’s a retrospective analysis of an old database (which is pretty much instant death to medical science) and a spurious correlation (which should never, ever be confused with causation).

Most of all, it’s missing a key piece of information: The scientists still don’t know how much noise each person was actually exposed to. Since they couldn’t pinpoint the locations of each bedroom relative to the road, and failed to examine how different house structures insulate from outside noise, both the waistline data and decibel data are highly suspect.

Still, the researchers might be on to something. Prior studies have shown that long-term exposure to road traffic noise increases blood pressure, risk of stroke and diabetes. That’s a bunch of good reasons to stay off the road on Memorial Day—unless you live near a highway. In that case, good luck.