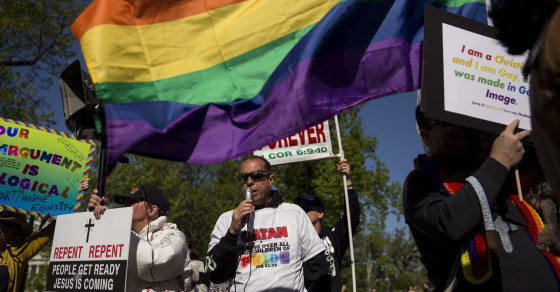 Update: The journal Science on May 28, 2015 officially retracted Green and LaCour’s study, stating that “independent researchers have noted certain statistical irregularities in the responses… LaCour has not produced the original survey data from which someone else could independently confirm the validity of the reported findings. Michael J. LaCour does not agree to this retraction.”

A study claiming that people’s views on same-sex marriage could be changed after brief conversations with proponents caused quite a stir last December; outlets including The New York Times, Los Angeles Times, and USA Today were all quick to cover the remarkable findings. As it turns out, they were a little too remarkable, with the study’s author, Donald Green of Columbia University, retracting the report yesterday after learning the data had been fabricated by co-author Michael LaCour, a UCLA graduate student.

The study claimed that a “20-minute conversation with a gay canvasser” helped shift attitudes in favor of same-sex marriage. As Retraction Watch notes, things began to unravel when University of California, Berkeley grad students David Broockman and Joshua Kalla tried to replicate the outcome with no success.

Broockman and Kalla sent their findings to Green who, in turn, brought the issue to the attention of LaCour’s graduate advisor. LaCour was asked for the data and contact information for the study participants, which he was unable to provide. It was then that Green decided to retract the study.

“Michael LaCour’s failure to produce the raw data coupled with the other concerns noted above undermines the credibility of the findings,” Green wrote in his retraction letter. “I am deeply embarrassed by this turn of events and apologize to the editors, reviewers, and readers of Science.”

Some publications have offered their own retractions in light of the news, or updated their stories to reflect the new information. LaCour himself was slated to start a position as assistant professor at Princeton University, but any mention of this has since been removed from his website.