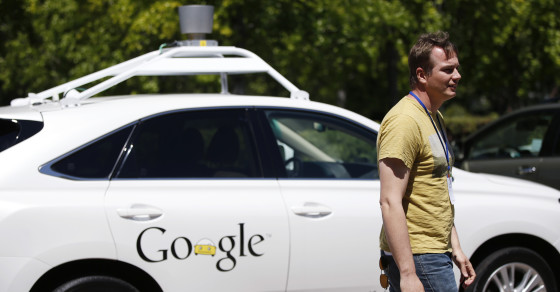 The jury is still out on the dangers posed by self-driving cars versus having humans in control of the wheel after statistics uncovered by the AP showed that four of the 48 self-driving cars allowed on Californian roads have had traffic accidents. Two of those accidents occurred while a human, who is mandated to be in the drivers seat, was in control of the car. The other two occurred when the car’s computer system was operating alone, the AP said.

Four, or two, accidents in the approximately 140,000 miles Google’s self-driven cars have traveled since September might seem high when compared to the national rate for reported “property-damage-only crashes,” which is only 0.3 per 100,000 miles driven, according to numbers from the National Highway Traffic Safety Administration. But that’s because the statistics kept on millions of vehicle accidents are skewed by the fact that human drivers often don’t report minor crashes or damage to their car. Google told AP that it’s possible there are as many as 5 million minor vehicle accidents that go unreported each year.

Google spokeswoman Katelin Jabbari said self-driving cars have accumulated more than 700,000 miles “autonomously” since 2007 “on both freeways and city streets, without causing a single accident.” But in a written statement, Google said cars driving around the company’s headquarters had “a handful of minor fender-benders, light damage, no injuries, so far caused by human error and inattention.” Some have criticized Google for failing to disclose the details of the incidents, but Google has cited California state law which says collision details can remain confidential.

The four accidents since September happened at speeds slower than 10 mph, two of them while the cars were in self-driving mode, an anonymous source told AP. Google executives have said self-driving cars will be on the roads in the next few years, while others have said it will take decades to get them approved for common use.