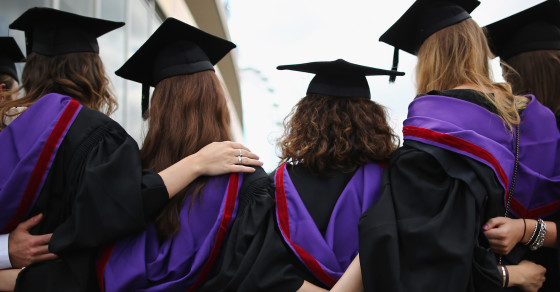 2015 Graduates Leaving School With $35,000 In Student Debt
By Abigail Tracy

2015 graduates will carry with their diplomas an average of about $35,000 in student debt as they enter the real world—the highest amount of any college class to date, according to a report by the Wall Street Journal.

Adjusted for inflation, this year’s class leaves school with more than double the debt of graduates two decades ago. As the cost of a college education has escalated, the number of students who have taken out loans to pay for school has also grown. The Journal reported that today, nearly 71 percent of graduates will exit school with a student loan to their name. That’s up from 64 percent 10 years ago, and less than 50 percent 20 years ago. Additionally, 17 percent of parents have taken out loans to pay for their kids’ degrees.

The student loan debt carried by the class of 2015 will total a staggering $68 billion–a sum greater than the GDPs of Belarus, Azerbaijan, Sri Lanka, the Dominican Republic, Uruguay, Afghanistan and Costa Rica.

Congratulations, Class of 2015. You’re the Most Indebted Ever (For Now) (The Wall Street Journal)
Wall Street Bonuses Could Pay Off These States’ Student Loans (Vocativ)
The New Student Loan Fixers (Vocativ)