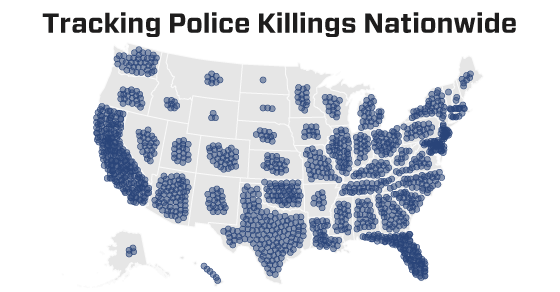 What 16 Months Of Police Killings In The U.S. Looks Like
By Shane Dixon Kavanaugh

What 16 Months Of Police Killings In The U.S. Looks Like

The high profile deaths of men and women at the hands of law enforcement officials in the last year—including Freddie Gray, Michael Brown and Eric Garner—have thrust the issue of police-involved killings into the national spotlight. But comprehensive data on the topic remains elusive. Even the FBI failed to count at least half the number of people killed by state and local law enforcement officers in the past decade, according to a government report released in March.

In attempt to capture a fuller picture of police killings in the U.S., citizen and activist groups have started compiling their own statistics through crime and media reports. One of the most comprehensive projects to date is a website called Killed By Police. The site logged nearly 1,500 police-involved deaths between January 1, 2014 and April 30, 2015 and included documentation for each incident.

This is what 16 months of police killings in the United States looks like.

Cops in Utah are responsible for 15% of all homicides (Vocativ)
Police killed more than twice as many people as reported by U.S. government (The Guardian)
Scant data frustrates efforts to assess number of shootings by the police (New York Times)