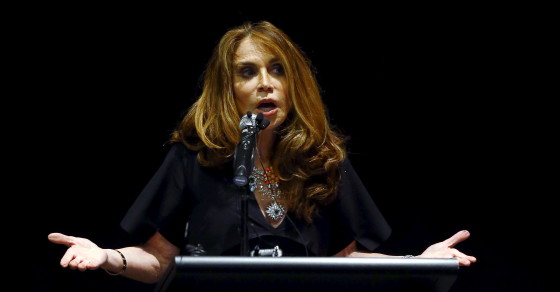 Pamela Geller Is Behind Many Anti-Islam Groups In The U.S.
By Abigail Tracy

Pamela Geller Is Behind Many Anti-Islam Groups In The U.S.

One woman, Pamela Geller, is associated with 17 percent of the anti-muslim activist groups on a watch list

While the number of anti-Muslim hate groups may be growing, in reality many are being run by the same handful of people—and Pamela Geller is chief among them.

Geller and fellow anti-Muslim activist Robert Spencer lead 17 percent of the anti-Muslim hate groups in the United States that the Southern Poverty Law Center (SPLC) has on its watch list, according to an investigation by FiveThirtyEight.

Geller is the executive director of the American Freedom Defense Initiative, which sponsored the highly controversial “Draw Muhammad” contest earlier this week where two gunmen opened fire. She’s president of Jihad Watch, which took out ads on New York transit that linked Islamic leaders to Hitlers. She is also the co-founder of Stop Islamization of America (SIOA) and is connected with Atlas Shrugs (redirects to Geller’s website) and the Truth About Quran—all of which the SPLC tracks.

According to FiveThirtyEight, the SPLC began tracking Islamophobic activist groups in 2010. At the time, they identified just five such groups, since that figure has surged to 24. Geller and Spencer are involved in four of these.

There is a similar pattern where money is concerned as well. In a 2011 report, the Center For American Progress found that the top seven contributors to “Islamophobia think tanks” provided funding to three of the eight groups the center tracked for a total of $42.6 million.

Nadir Soofi Identified As Second Suspect In Texas Shooting (Vocativ)
A Few People Lead Many Of The Anti-Muslim Groups In The U.S. (FiveThirtyEight)