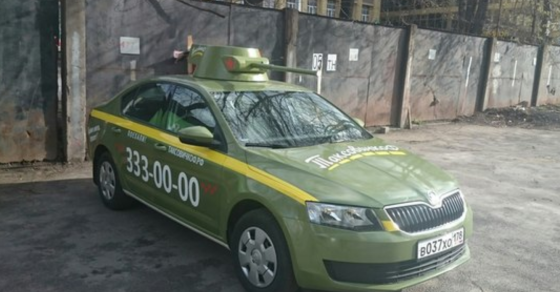 Latest Sign Of Russian Nationalism: Taxis Dressed Up As Tanks
By Sarah Kaufman

Latest Sign Of Russian Nationalism: Taxis Dressed Up As Tanks

Russia is experiencing a surge of patriotism in the midst of the worst relations it’s had with the West since the Cold War. The nationalism is so intense that one Russian taxi company has dressed some of its taxis up as war tanks.

The St. Petersburg-based cab company, Taksovichkof, decorated 10 of its cars as Russian war tanks this week to mark the 70th anniversary of Russia’s victory over Germany in World War II. It posted an announcement to its page on VKontakte, Russia’s Facebook, saying its tanks were a tribute to the veterans of the “Great Patriotic War.” It then challenged people to seek out one of the tanks, take a picture of it and post the photo to social media for a prize.

Russia’s widely celebrated “Victory Day” — to mark the Soviet Union’s victory over Nazi Germany in 1945 — takes place on May 9. This upcoming 70th anniversary is expected to be the largest Victory Day celebration in Russian history.

“In memory of the feats of our forefathers and foremothers who fought heroically against the Fascist Nazi invaders,” the Taksovichkov announcement says, “‘Taksovichkov has released a series of taxis on the roads of St. Petersburg that symbolize the feats of the Soviet people. So if you call a gold taxi, don’t be surprised if it arrives in fatigues.”

Many Russians were pleasantly surprised:

Translation: “I called a taxi, but a tank arrived. I’m amused.”

Translation: “Taxi-tank, to whom it concerns!)) Happy Victory Day!”

But others were irritated:

Translation: “You and your victory day have lost your fucking minds.

In moments like these, the motherland isn’t cute. I want to fucking leave this moronic country. P.S. If you can’t see, there’s a taxi with a tank tower on top of it. P.P.S. It’s parked near my house. I’m so tempted to scratch something like “#OurCrimea.” More information here: [link]”