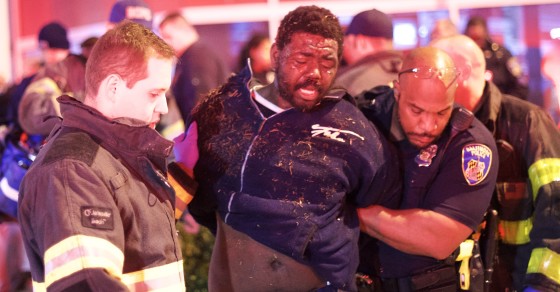 More than 200 people have been arrested in the rioting, and because there's no school, thousands of kids can't get free lunches

Some community leaders in Baltimore are using social media to raise funds to provide food, legal advice and even bail money to people who have been impacted by the rioting.

More than 200 people have been arrested since rioting began following the death of Freddie Gray, whose spinal cord was severed in police custody. In response, some residents have begun to crowdsource a fund to provide legal advice and bail money to those who were arrested. Since the fundraising began early Tuesday morning, more than 360 people have donated more than $24,000 and offered comments in support of those arrested, according to the funding site Sunrise.

“I stand with Baltimore for Mya Hall, Freddie Gray, Tyrone West, and all those killed at the hands of a white supremacist system. I’m proud to call Baltimore my home,” one of the donators wrote. “Condolences to Freddie’s family. Solidarity and love to all the freedom fighters,” wrote another.

The Baltimore City Public School District canceled classes on Tuesday, which meant that kids on free-lunch programs had to scramble to fill the void. According to the district, about 80 percent of its 85,000 students rely on free or discounted lunches provided by the school, and community leaders fear the closure could leave nearly 70,000 students without lunch.

Over the past day, the social media hashtag #Baltimorelunch has become a forum for people to find food for kids who may not be able to get any at home. Leading the effort is a group called Operation Help or Hush, which has arranged for free lunches to be served at seven locations throughout Baltimore. Operation Help Or Hush, an advocacy group formed during the riots in Ferguson, Mo, uses Twitter to mobilize supporters to provide assistance to those involved in protests and civil unrest. Other organizations are offering child care for children with working parents in Baltimore.