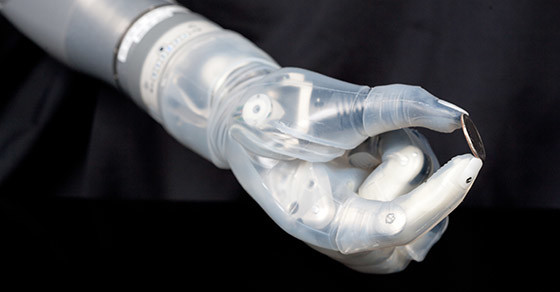 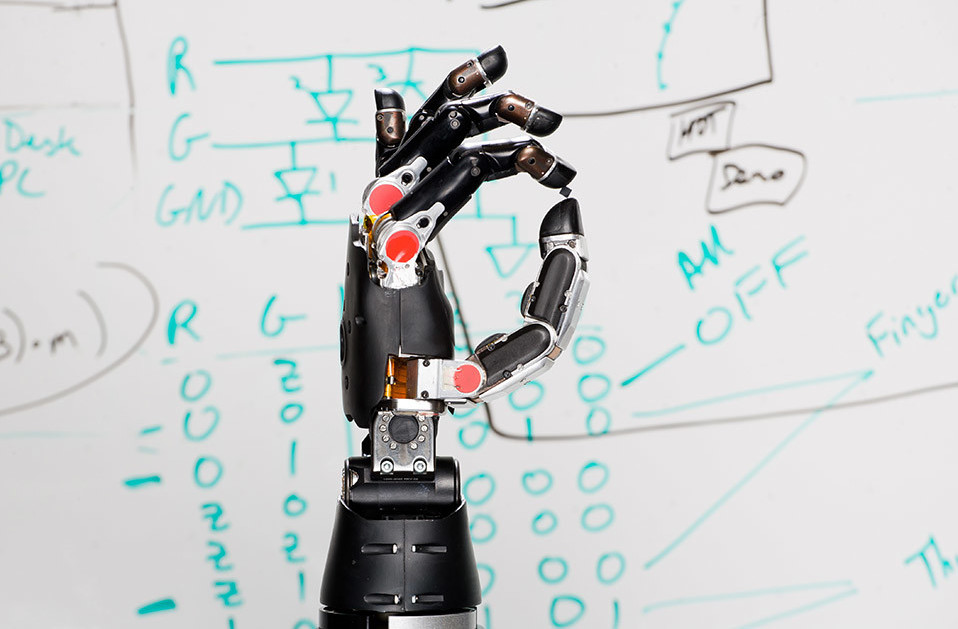 There are about 10 million amputees around the world, and some 20 percent of them live in the U.S. Prosthetic legs are relatively straightforward—you can even buy them on eBay now. But prosthetic arms and hands are a much more difficult, and intriguing, challenge.

Think about it: The hand is composed of 27 little bones. Your fingers perform tiny motions to complete even the simplest task, like tying your shoes. So you can imagine what goes into creating a truly bionic hand. For many arm amputees, hooks are seriously still the best option.

But in the last few years, there’s been a kind of boom in the technology behind these prosthetic limbs. Their names—like the Raptor Hand and Cyborg Beast—sound like something out of a sci-fi movie, but they are very much real.

On one hand (ha, ha), you have ultra-cheap, DIY 3D-printed limbs that are being used to treat amputees in developing countries. On the other, scientists have developed some mind-bending innovations. Recently, scientists began implanting brain chips into paralyzed patients, who control artificial limbs with their thoughts.

The industry around these prosthetic devices is growing, too. More than 50 companies are competing to dominate the world’s need for fake arms and legs. We looked at some of the coolest prosthetic limbs out there.

What makes it cool: For amputees, going through the process of having a prosthetic fitted can take week—even months. It’s also outrageously expensive, especially if you’re uninsured. All the parts of the Robohand can be custom-fitted and 3D-printed with a Makerbot, which you can now buy at a local Home Depot for $2,000. So far, it’s been used in places like Sudan and Haiti.

Backstory: In 2011, Richard Van As, a carpenter in Johannesburg, South Africa, accidentally cut off all the fingers on his right hand in a work accident. Pretty much the same day, he set out looking for a cheap, prosthetic option, but there was none. So he went online, connected with an engineer named Ivan Owen and began collaborating.

What makes it cool: Technically, Bespoke Innovations is not a prosthetic company, but it makes some incredibly cool “fairings”—essentially specialized coverings that add personality or style or function to a prosthetic. “Fairings can be enhanced with patterns, graphics and materials—including leather, ballistic nylon fabric, chrome plating and even tattoos,” the company notes. “By creating a unique custom form that presents the individual, Bespoke Innovations hopes to change the way the world thinks of prostheses.”

Backstory: Bespoke Innovations was founded in San Francisco in 2010 by Scott Summit, a designer and entrepreneur. “Growing up in the ’70s and watching The Six Million Dollar Man every Sunday night. This was an inspiration for us,” Summit said a recent Stanford lecture.

What makes it cool: The bebionic works on a series of grip patterns—14 to be exact. Whether you want to drink a beer or use a power drill, the bebionic was designed so that its user can pretty much do anything. Each digit is powered by its own tiny motor, and each user operates the grip in a totally unique way.

To enact a grip, its user moves his or her biceps or triceps in a specific way. As the company explains: “Electronics [in the artificial hand] measure electrical changes on the skin covering the control muscles and command individual actuators in the hand to provide the desired movements.” You can see how this works in the video below.

RSLSteeper does not release the number of units sold, but the bebionic is one of the more popular models on the market. Getting insurance agencies to pay for a prosthetic can be notoriously difficult, but the company told Wired recently that the costs are low enough that most major carriers in the U.S. should cover it.

Backstory: The bebionic is manufactured in England by RSLSteeper, and its products have drawn comparisons to the bionic limbs in The Terminator.

What makes it cool: The iLimb, like the bebionic, uses tiny motors in each of the digits to create a series of grip patterns. It’s also controlled by electrode that are placed directly on the user’s skin. What makes it different is a new feature called “quick grips,” a smartphone app that tethers to the hand with a Bluetooth connection and that can quickly change the grip. It’s hepful if the person wants to, for example, pick something up that’s at an usual angle.

“Up to 24 different grips can be selected, allowing instant access to new grips with the tap of a button on the app screen,” the company explains. “An additional 12 custom my grips may also be programmed, offering the user up to 36 different grips or gestures.”

Backstory: The iLimb is owned by Touch Bionics, one of the world’s largest prosthetics firms. The company technically got its start back in 1963, when it was creating prosthetics for children affected by Thalidomide, a skin condition caused by leprosy.

What makes it cool: The DEKA Arm—nicknamed by “The Luke Arm” for Luke Skywalker’s bionic arm—is brainchild of the famed inventor Dean Kamen. In May, the DEKA arm, which was funded by a DARPA grant, became the first bionic limb on the market to receive FDA approval. Like the other bionic hands, it operates from electrodes placed on a user’s muscles. But with the DEKA Arm, the switches that control the hand’s grip are placed on the user’s toes. Although the DEKA Arm has been granted FDA approval, it does not yet have any commercial users.

Backstory: Eight years ago, in the midst of the Iraq and Afghanistan wars, DARPA created the “Revolutionizing Prosthetics” campaign help returning veterans. It has won about $100 million in government grants, and has FDA approval.