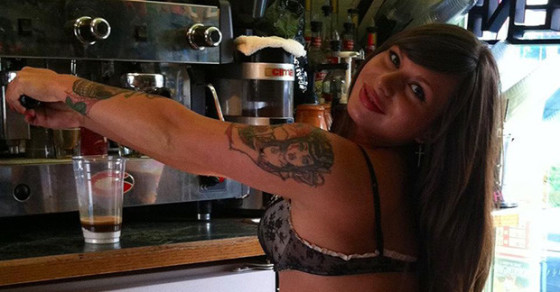 Coffee With a Side of Skin and Harassment 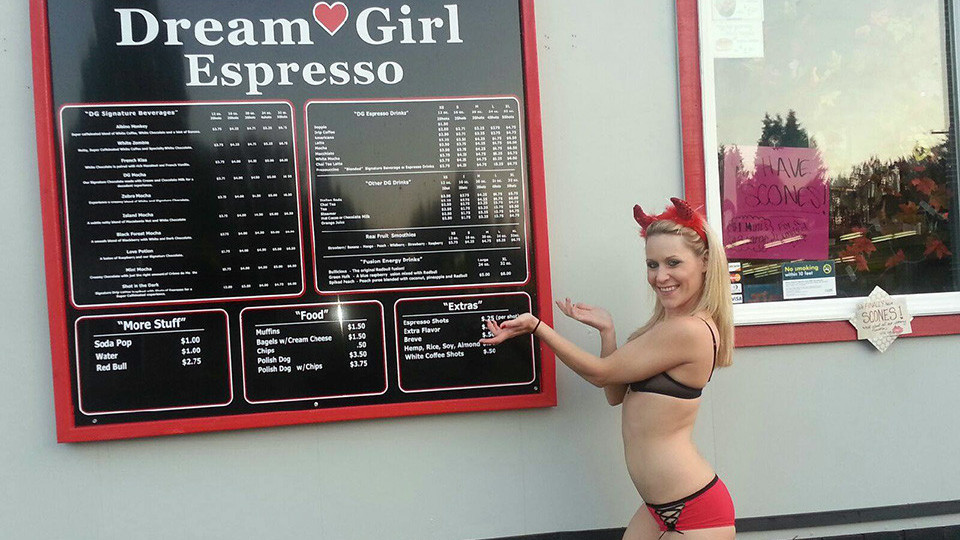 LACEY, WASHINGTON—Rebecca Gettman, 23, makes a damn good cup of coffee. But for most customers here at the Maxim Girls Espresso stand, her brewing skills may be an afterthought. When my wife and I met Gettman on a frigid afternoon earlier this week, her uniform consisted of an open-bust bra, a black thong and a pair of zebra-striped pasties on her nipples. “It takes a certain kind of sexy to do this job,” she says. “You have to be really friendly and tough as fuck. You have to be ready to shoot somebody. You have to shave your vagina, like, every day.”

She’s not the only one. For decades, drive-through java stands have been a staple along the dreary highways here in the Pacific Northwest. But these days it’s hard to miss the names of joints like Java Jugs, Body Shots and Peek-a-Brew. At least 131 sexpresso huts now line the roads between Seattle and Portland, and their bikini-wearing baristas make big bucks in gas station parking lots, among other places, across the region.

They’ve also managed to bring a raft of controversy just about everywhere they go. “We’re not in the business of deciding morality,” says Aaron Snell, an officer who works for the Everett Police Department. “But sometimes it’s a quality of life issue that ripples through the community.”

He would know. A few bikini coffee stands have caused major problems for this city just north of Seattle. In 2009, Everett detectives busted five women at a coffee kiosk for prostitution. Undercover cops witnessed them licking whipped cream off each other’s chests, exposing their crotches and posing for naked photos, according to police reports. Men would pay up to $80 to touch the baristas’s bare bodies.

More Are Women as Creepy as Men When Trawling for Dates on OkCupid?

These sexual shenanigans have whipped some locals into a serious frenzy. Residents in Forest Grove, Oregon, a Portland suburb, tried to torpedo a Dream Girl Espresso stand when it opened over the summer. Dozens staged protests and stormed city council meetings. Others stalked the baristas on Facebook and lurked outside the coffee stand with video cameras hoping to capture some seedy activity, according to Leah Sizemore, a former barista and the stand’s 25-year-old owner. “I was completely speechless,” she says. “They called my employees strippers and prostitutes. One woman said she’d assault my baristas if they so much as looked at her.”

The Dream Girl Espresso shop has recently come under fire in a Portland, Oregon suburb.

Sizemore and others hope to draw focus to the profession’s less salacious sides. Most baristas come from blue-collar families; they earn far more making mochas in thongs than flipping burgers in aprons, they say. Some can make as much as $40 an hour, which can help pay for college, a nice car or a mortgage. A few simply enjoy the attention, and have dedicated fans on Facebook and Instagram.

Of course, some patrons can get inappropriate—and downright creepy. Gettman has been solicited for sex multiple times. She’s been asked to star in pornographic films. One guy even asked—very politely—if he could buy her underwear.

At Southeast Portland’s Hot Bikini Brew, Kylie Dennett, 25, says she’s quickly learned not to put anything past patrons. There are men as old as her grandfather who scream “Nice ass!” at her. There’s a kid who constantly comes by to order milk and stare. And there’s one unwanted customer who drives up to the stand in different-colored cars just to jack off and toss money at the women. “Every time he says he’s sorry and speeds off,” says Dennett, who, on a recent Tuesday, was wearing a red bikini, white tutu and a Hello Kitty stocking cap.

Kylie Dennett says perverts of all ages come to gawk at her and her co-workers. (Amy Sly/Vocativ)

Creepers aren’t the only problem. Bikini coffee stands have also become easy targets for bandits trying to pinch a quick buck. A knife-wielding man robbed a Twin Perks Espresso in broad daylight back in June. In September cops charged a 12-year-old boy with holding up Everett’s Hillbilly Hotties with a revolver. The kid’s getaway vehicle? His bicycle. And two years ago three teens in Washington were arrested for robbing and sexually assaulting a barista.

The women who work as bikini baristas say it's just an honest day's work, like any other job. (Amy Sly/Vocativ)

The ongoing controversy and the public safety concerns have at least a few cities scrambling to take action. Lawmakers in Spokane, Washington, recently tried—but failed—to pass an unlawful public exposure ordinance that would regulate what people could and could not wear in public. Yet the legislation has gained traction in neighboring Spokane Valley, where the city council is poised to approve the measure on Nov. 26.

The looming crackdown is enough to give Gettman goose flesh, even though she lives more than 300 miles away. “We’re not all bad,” she says.

As I chatted with Gettman while enjoying a frothy Americano, a Thurston County sheriff’s deputy pulled up to her stand in a black SUV. The two chatted and laughed as Gettman served him a large coffee, topped off with chocolate syrup and whipped cream. “People just need to get the fuck over themselves,” she says.