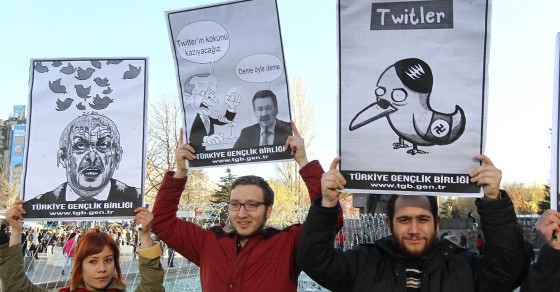 Turkey Asks For Twitter Takedowns Most Often
By Eric Markowitz

Twitter unveiled its biannual transparency report today, and one thing is clear: Some governments are desperately trying to get Twitter to remove content from the site.

Turkey leads the pack, requesting 477 takedowns in the last six months, more than five times the next most demanding country. Russia and Germany trail behind at 91 and 43, respectively. Governments will typically submit court orders to Twitter to remove defamatory statements or if law enforcement believes someone is posting “prohibited content.”

Some of these numbers aren’t particularly surprising. Prime Minister Recep Tayyip Erdogan of Turkey is notoriously anti-Twitter. Last year, he “vowed to ‘wipe out Twitter’ after users spread allegations of corruption.”

The report also notes that the “increasing volume of requests made by Russia” are directly related to a law that bans “extremist” content or tweets that lead to “mass actions.” Vocativ received a similar removal request (as did Buzzfeed) from Russia’s communications office, Roskomnadzor, for a story about an ISIS documentary—threatening to ban our site in Russia if it was not taken down. Nothing happened.

Though it received 89 requests from Russia, Twitter agreed to remove content in only 13 percent of the cases. “We denied several requests to silence popular critics of the Russian government and other demands to limit speech about non-violent demonstrations in Ukraine,” Twitter notes.

And we should note that when it comes to requesting information from platforms, this is all small beans when compared with the mack daddy of Internet manipulators—the United States of America. Uncle Sam asked Facebook for user data 15,433 times in 2014 (referring to 23,667 individual accounts), with India in second place, requesting user data for 5,958 people in 4,259 separate requests.