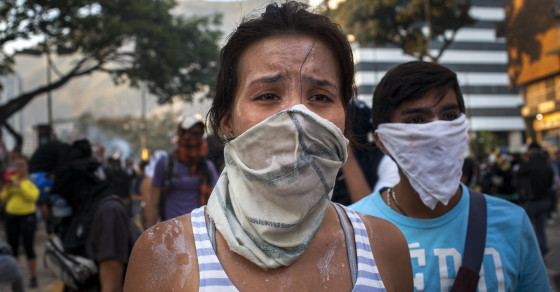 Venezuela: A Tale of Two Cities
By Natalie Keyssar

Venezuela: A Tale of Two Cities

On March 5, 2014, the anniversary of the death of Venezuelan President Hugo Chavez, Caracas was a deeply divided city. In neighborhoods like El 23 de Enero, a Chavista stronghold and the location of the Cuartel de Las Montañas, the leader’s final resting place, Chavez supporters gathered, decked out in red. They chanted support for their embattled president, Nicolas Maduro, and the Chavez legacy, both beloved by many of Venezuela’s poor whose lives were buoyed by Chavismo socialism.

Thousands turned out for a military parade in honor of the anniversary, as tanks, missiles and all manner of armed forces passed through the streets in a show of government strength. “Chavez lives! The struggle continues!” echoed through the Los Proceres promenade. “Nothing will destabilize this president,” said one woman, “because his power comes from the people.” For a single, surprising moment, some booing rang out as soldiers passed by, perhaps the only brief indication of the unrest brewing all over the country, and just a few miles east of the parade.

That unrest was evident not far away from the festivities. For nearly a month, youth and students have gathered every day in the upper class enclave of Altamira for a different show of strength. They come to express outrage over the deadly crime problem in the country, skyrocketing inflation, and the shortage of necessities and food supplies. Violent clashes between protesters, police and military have led to more than a dozen deaths.

You can see more of Natalie's work here.

In Plaza Altamira, hundreds arrived to build barricades, wearing homemade gas masks, and prepare for their seemingly ritualized clashes with the authorities. Around 5 p.m., after refusing to concede part of a blocked street to the police, volleys of tear-gas canisters, some shot at head level, were launched at the protesters, who responded with slingshots, Molotov cocktails, thrown concrete fragments and screamed insults. Some hung back from the barricades to ease the effects of tear gas with spray bottles full of vinegar and Maalox.

As the police intensified the tear-gas attacks, protesters launched fireworks in their direction. Elderly women banged pots and pans from apartments above in disapproval. When the military officers revved their motorcycle engines to approach, the youth stampeded to higher ground, fearing arrest, with many taking shelter in the lobbies of sympathetic neighbors. “Hide,” an elderly woman shouted as teenagers streamed through her gates. “Hide back there where they won’t see you!”

After dark, the protesters erected new barricades of burning trash and scrap metal brought in on motorbike. As is customary at the Altamira protests, their numbers had dwindled around 8 p.m., for fear of arrest or the possibility of police escalating their choice of weapons to guns.  “Welcome to Caracas!” said a grinning young man to a foreign photographer, before heading home for the evening.