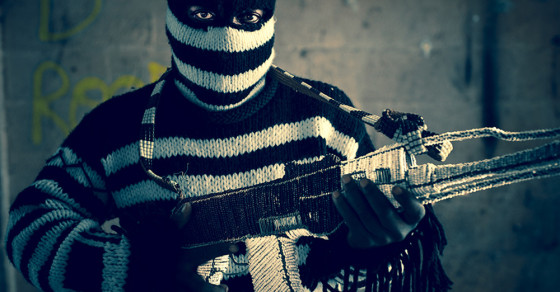 The Beaded Guns of Africa
By Dustin Drankoski

The Beaded Guns of Africa

Can a series of artisanal, beaded AK-47s in bright colors serve as silent protest to the international arms trade?

This is what street artist and director Ralph Ziman seeks to discover in his latest series of photographs, titled “Ghosts,” a tribute to the shady, overpowering and threatening presence of guns in African cities. “Sub-Saharan Africa is awash in weapons,” says Ziman. “Countries that cannot feed, clothe or educate their populations can find the money to buy weapons.”

Ziman, born and raised in South Africa, first considered the menacing role of guns in sub-Saharan Africa in 2004, when he was studying crime in Johannesburg. For one year, Ziman traveled alongside an elite police unit each night, listening to gun fire and watching the police treating victims of gun shots. The artist’s time with the “tough-as-nails” police corps, many of whom were offered related jobs in Iraq, forced him to confront many questions about Africa’s arms trade. “How did all these guns get to Johannesburg?” Ziman says he wondered. “Who brought them in?  Where did they come from?”

To explore arms smuggling and trafficking in South African culture, Ziman traveled to Zimbabwe and South Africa last year, where he built 200 of his own AK-47s with the help of six Zimbabwean street vendors. The vendors, artisans who “manufactured” the guns as part of their daily trade, took part in all aspects of the guns’ production—the sourcing of the materials, beading of the guns and ultimately modeling them on camera. Ziman photographed the vendors grasping at their guns, ones made of bent wire and intricately threaded beads in a traditional Shona style, in inner-city Johannesburg.

Ziman’s photographs are currently on display and on sale at Los Angeles’ C.A.V.E. gallery until March 2. Likewise, his guns are currently for sale, and all proceeds will be donated to Human Rights Watch. “I believe some real good can come from this reverse of the usual arms trade,” Ziman says of the sales. “It’s one that advances rather than destroys humanity.”