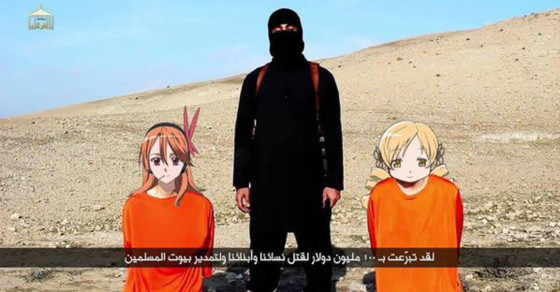 Japanese citizens have responded to a $200 million ransom request by ISIS for two Japanese hostages in the most unexpected, but perfectly Japanese, way imaginable. Social media users have launched a “memefest” caption competition, Photoshopping images of the ISIS captors and the two Japanese hostages. Memes range from a doctored photo depicting an ISIS member as Dr. Evil from the Austin Powers franchise to a user inserting llamas, lightsabers, anime characters and more into the landscape.

If this had been conjured up externally, it would seem to be a heartlessly insensitive reaction to a very serious situation, but this is a homegrown meme-mockery of ISIS by Japanese citizens themselves. The rising hashtag associated with the posts, #ISISクソコラグランプリ, roughly translates to “ISIS crappy collage grand prix,” and has been used more than 67,000 times since Monday based on data from Topsy.