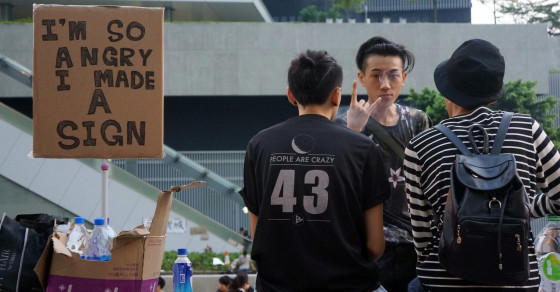 Behind the Barricades at Hong Kong’s Democracy Protests

Spurred by election reforms passed down from the Beijing central government, the protests in Hong Kong had erupted into a fuming chaos in the days before. Tonight the city saw an uneasy quiet as police traded tear gas for a more peaceful show of force and demonstrators’ represented themselves with signs instead of shouts. Indeed, with its litter-removal campaigns, apologies to local businesses and general demeanor, the “Umbrella Revolution”—so named for the umbrellas demonstrators used to protect themselves from mace and tear gas—may be the most polite protest in recent memory. Even though curfews and edicts demanded they return to their homes, the protesters—most of them young—stood firm in their occupation of the city streets, entrenching their positions and planning for further protests. The relative peace gave photographer Tom Grundy a chance to walk through these crowds, capture the faces of the demonstrators and document the signs and messages they carried.