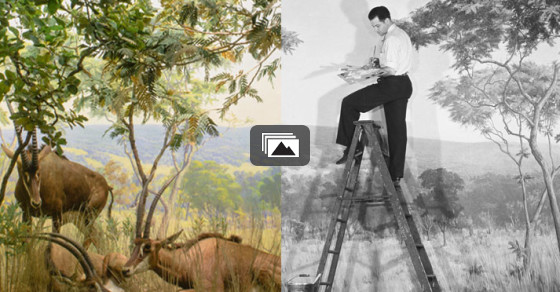 The American Museum of Natural History’s Temples of Taxidermy, Then and Now
By Elizabeth Kulze

The American Museum of Natural History’s Temples of Taxidermy, Then and Now

Last week, the American Museum of Natural History launched its Digital Special Collections site, an online database of over 7,000 newly digitized images from its archives. The trove, which spans AMNH’s 145-year history, includes illustrations from the museum’s Rare Book Collection, hand-colored lantern slides and scenes from science expeditions far and wide. But for all the exotic landscapes, some of the most memorable scenes are actually set inside the museum itself, depicting artisans constructing the institution’s world-famous dioramas as far back as the 1920s. The photos tell the behind-the-scenes story of how the lifelike exhibitions came to be, an undertaking that spanned decades.

“This was a process that was perfected here at the museum,” says Tom Baione, the museum’s Boeschenstein director of library services.

Individual dioramas often took years to complete, as scientists and artists physically traveled to each place to take photographs, render sketches and collect zoological and biological specimens, sometimes staying for months at a time. Each plant and animal then had to be shipped back to New York City and artificially recreated for display.

Following the trip, a massive arts and crafts endeavor began back at the museum, where the flora and fauna were brought to life. Artists painstakingly painted the background of each scene, ensuring the perspective was as realistic as possible, while preparators (basically exhibition elves) took on the most unwieldy projects—like creating millions of leaves from paper, paint and wax, or seamlessly attaching real bark to a tree-like form. “The key was to find materials that could both fool the eye and last for a long time,” says Baione.

The main event, however, was the taxidermy, which wouldn’t have been possible with out Carl Akeley, the godfather of modern animal mounting and one of the greatest madcaps you’ve never heard of. The Hall of African Mammals is actually named for Akeley, who replaced the old method of stuffing animals with the more realistic technique of affixing their skin and features to an accurately measured mold of their musculature. The revolutionary approach became the difference between a shoddy-looking lion and one that seems real enough to kill you.

“The exhibits would not be what they are without Akeley,” says Baione. “He raised the bar for taxidermy and turned the craft into an art.

The rugged outdoorsman was also notoriously cavalier in his quest to obtain certain animals, like the time he was pinned to the ground by an irate elephant, or when he killed a leopard with his bare hands after it tried to eat him. Akeley actually jammed his fist down the leopard’s throat to gag it, then fatally body-slammed it on the Sahara floor. Today the beast’s skin can still be found in the museum’s library.

Akeley’s great catfight is just one example of the dedication and skill it took to bring the AMNH’s gloriously detailed dioramas to life. Scroll back to the gallery at the top to see the archival shots next to full-color images from today.