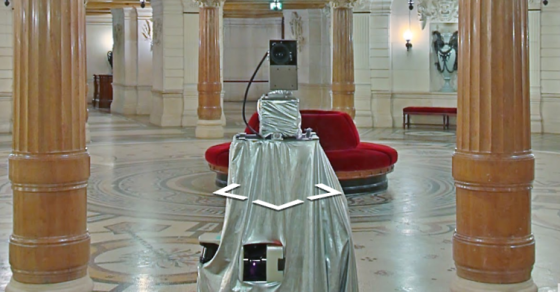 When Google Cultural Institute’s Art Project launched in 2011 to take Google Earth-like tours inside the world’s elite museums, its goal was simple: “Democratiz[e] who gets to look at art and how,” as ArtNet’s Cait Munro puts it.

But in the three years since the project’s debut, the institute’s camera has captured more than hallowed halls and celebrated exhibits; the wraparound tours have also pictured the museums’ more eccentric details, like reflective mirrors on the wall and trademarked works that are not allowed to be seen on the Internet. And Barcelona-based artist Mario Santamaria is documenting all of these moments in two new Tumblr projects.

In his latest blog, “The Camera in the Mirror,” Santamaria collects screenshots of Google’s tours when the institute’s camera catches itself in a museum mirror. The result is a series of robot selfies—the camera posing before a gilded museum room surrounded by art. “This kind of moment breaks the illusion in the environment,” he says.

Santamaria breaks similar illusions in a related Tumblr, “Righted Museum,” where he demonstrates how Google must blur certain museums’ artwork for copyright reasons. As the institute’s camera swings around the room, it captures artwork it can’t display on the Internet, meaning Google must disguise the image from viewers, leaving a blurry wall patch in a frame.

Together, the camera selfies and missing paintings emerge as a sort of playful joke on Google. “It’s a very controlled area,” he says of the museums and their treasures. “If you see something, it’s because other people want you to see it. It’s funny when you can find errors, and note this as a contradiction.”

Santamaria admits he isn’t the first to study glitches in the Google art database, which is the older sister of the recently launched Google Street Art Project; L.A.-based artist Chadwick Gibson carried out a similar project in 2011 with his “Mirrors Behind the Curtain,” a blog for which he, too, tracked down the Google camera’s mirror selfies.

But Santamaria’s series are a fascinating look at how Google controls what we can and should see inside museums. Santamaria himself calls his collections “political,” citing that while the institute may seek to democratize art, it also maintains enormous authority over where we’re invited. And in many ways, Santamaria’s work degrades this autonomy, capturing imperfections in Google’s otherwise seamless tours.

Click into the gallery to check out Santamaria’s gotcha stills.