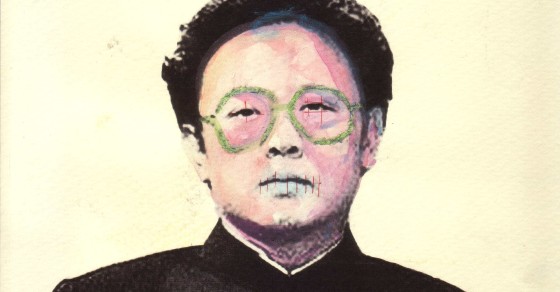 5 Questions With a Guy Who Paints Dictators
By Alessandria Masi

5 Questions With a Guy Who Paints Dictators

Even though some of their statues have been toppled, many dictators remain immortalized in fan art. (Yes, though hard to believe, some dictators have fans.) Artist Michele Boccamazzo, while not technically a supporter, does paint visages of some of the most notorious world leaders.

The 30-year-old Italian-native lives in Amsterdam and explores through his art the characteristics common to most dictators: idolization, respect and mythology. He has painted some of the world’s greatest (or worst, depending on how you look at it) dictators, including Bashar al-Assad of Syria, Omar al-Bashir of Sudan, Ilham Aliyev of Azerbaijan and Robert Mugabe of Zimbabwe.

The paintings, which use old still photos of the dictators reimagined with a pale palette of watercolor, first appeared in the Articks Gallery in Amsterdam in 2012. (If you’ve seen any of these guys, you know how disturbing they’d look in pale pinks and violets.)

Boccamazzo has a background in communications and video production, which he studied in Milan. He moved in 2008 to Amsterdam, where he decided “to focus my attention and my creativity on communication projects not necessarily with a commercial focus.” The paintings were apparently not made for financial gain, but if you want to bring home one of the infamous world leaders, it will cost you at least $115.

1. How did the project start?

I have always been interested in dictatorships and how they use communication. Once, while researching something for work, I came across a list of dictators that were still alive and in charge in their countries. I started looking for more information, and I found some common elements, such as iconography, cult of personality, narcissism, influences and connections with the rest of the world. I started collecting images and working on this project with the idea to highlight all the contradictions. I realized you could look at them from several points of view: They are gods, fathers, heroes, revolutionaries, terrorists, thieves, businessmen, influential leaders, etc.

2. How did you choose to represent them?

I decided to use pictures that represent them when they were young, because gods do not age. I used colors typical of the pop culture (as pop idols). The aim of the project is to provoke and engage the spectators in a conversation.

3.  Why do you choose to illustrate dictators, and not just world leaders?

Dictators build personality cult around them; they position themselves not only as politicians, but also as spiritual leaders. While Obama, for example, presents himself as a person who is representing the U.S. at the moment, Kim Jong-un is North Korea.

4. Who did you expect to see your art?

With my background in communication, I always tend to communicate to a large audience. With all my works, I wanted them to be easy to understand and digest. I like to make sure that everyone can get my starting point, while I assume different audiences will get to different levels of understanding.

5.  Which one was your favorite?

My favorite is Gaddafi. First, for the several connections he had with Italy, and then because it was the first portrait of the series I made. Plus, I really like the picture I started from: It is from the late ’70s and it shows him as a good-looking man. He’s looking forward, full of hope and charisma. I selected him as representative of the series when the project was exhibited in the Articks Gallery in Amsterdam in 2012.