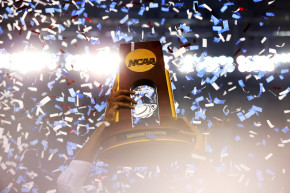 Despite sunny headlines of overall success, gap between white and African-American players has widened

The Institute for Diversity and Ethics in Sport (TIDES) at the University of Central Florida compiled the Academic Progress Rate (APR) of all 32 Division I men’s and women’s hoops teams still alive in March Madness. The findings: 31 of those teams all have an APR of 960 or better which, in less byzantine terms, means that the majority of each program is retaining the majority of their athletes in school while they maintain their academic eligibility and progress toward a degree. (Schools with a four-year APR average of less than 930 are ineligible for tournament play.)

Six women’s programs, including world-beating top seed UConn, are all graduating 100 percent of their players while two men’s teams—Butler and Kansas—are also perfect on that count. Only three men’s teams don’t have a graduation success rate (GSR) of at least 70 percent: UCLA and UNC (50 percent each) and Oregon (38 percent).

The Ducks are the academic laggards on all counts: their men’s team is responsible for the one sub-960 APR (945), and their women’s program is also last in graduation rate at 79 percent.

A TIDES study earlier in the month encompassing all 68 men’s tournament teams found a similar gap in graduation rates among white players (93 percent) and African-American players (74 percent). The 19-percent difference was one point higher than in 2016, marking the first increase since 2011.

And that should be the takeaway of all this academic data. It’s hard to crow about overall numbers when such a problem persists. In this case, the sum should be seen as less than its parts.