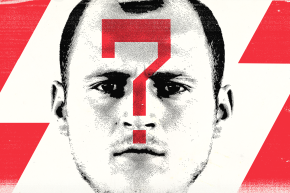 Did ESPN Let A Nazi Soccer Player Off The Hook?
By Robert Silverman

Did ESPN Let A Nazi Soccer Player Off The Hook?

Roman Zozulya is supposedly the victim of a fake news campaign, but an investigation raises serious questions about his ties to fascist groups

On March 9, ESPN FC published a story that painted Roman Zozulya–a Ukrainian soccer player in Spain’s La Liga—as the victim of a “preposterous” “fake news” campaign that wrongly branded him a Nazi. This week, ESPN aired a segment on “Outside The Lines” doubling down on Zozulya as the victim of poorly researched smears.

However, there is significant evidence that casts doubt on both the claims of the story and Zozulya’s own political allegiances. The story, written by ESPN’s global sports correspondent Sam Borden, zeroed in on a t-shirt bearing the Ukrainian crest that Zozulya was photographed wearing upon his arrival in Sevilla to join the Real Betis club.

Borden correctly points out that a string of websites misidentified the crest as belonging to Pravyi Sektor (Right Sector), a far-right Ukrainian nationalist political party that counts fascists and neo-Nazis among its constituent groups. The story also makes reference to a dossier compiled by an ultra fan group of Rayo Vallecano—a second division La Liga team to which Real Betis loaned Zozulya’s services—that supposedly contains evidence of Zozulya’s ties to neo-Nazi and fascist groups.

Vocativ has acquired the dossier and its contents—as well as the contents of Zozulya’s own public social media accounts—are in stark opposition to Zozulya’s stated claims that he does not support any paramilitary or neo-Nazi groups. The document can be viewed online here.

Zozulya’s management did not make themselves or Zozulya available for comment. ESPN did not provide an official comment prior to publication, but we will update this article if and when we do receive comment. [Update: ESPN has officially declined to comment on this article and whether or not the company stands behind their story.]

The strongest evidence contradicting Zozulya’s claims of innocence are images that show a winking approval of far-right and neo-Nazi groups, the worst of which being Azov Battalion. In this case, Zozulya’s connection to a despicable group does involve a t-shirt. On August 31, 2014, Zozulya was playing for FC Dnipro Dnipropetrovsk, a Ukrainian Premier League team situated at the center of the fighting between Russian-backed and Ukrainian forces. Before a match against Vorskla Poltava, Zozulya and the entire FC Dnipro side entered the pitch wearing t-shirts commemorating a member of Azov Battalion who died in combat. Zozulya shared an image on Twitter of himself and teammates wearing the t-shirt.

Azov Battalion is a fascist, far-right Ukrainian paramilitary organization founded in April 2014 by Andriy Biletsky, an avowed neo-Nazi and white supremacist. The volunteer fighting force was officially incorporated into the National Guard of Ukraine in January. Azov logos draw heavily from the German Nazi party and members have no compunction about expressing their support for both white nationalism and/or anti-Semitism.

Via the the BBC:

Run by the extremist Patriot of Ukraine organisation, which considers Jews and other minorities “sub-human” and calls for a white, Christian crusade against them, it sports three Nazi symbols on its insignia: a modified Wolf’s Hook, a black sun (or “Hakensonne”) and the title Black Corps, which was used by the Waffen SS.

In a September 2015 report, Amnesty International cited the violent human rights violations committed by partisan fighters on both sides, calling them “ISIS-style” war crimes and citing Azov Battalion in particular for the uptick in Nazi imagery.

Azov Battalion isn’t the only far-right group Zozulya has been linked to. In another photo, he’s holding up a card of the Dnipro “White Boys,” one of the team’s far-right ultra groups.

The Dnipro White Boys use the same Nazi imagery as Azov Battalion and Zozulya has long been a favorite of Dnipro ultras. As Vice Sports reported, Ukrainian ultras have been funneled into Azov Battalion since the early days of the fighting.

Further, a 2015 picture of Zozulya shows him in a gym pointing to a scoreboard flashing the numbers 14 and 88. Among neo-Nazis, 14 refers to the 14 Words: “We must secure the existence of our people and a future for white children.” The number 8 is code for the letter H. Therefore, 88 equals “HH” or “Heil Hitler.”

The number 18—which Zozulya wore as his jersey number with FC Dnipro prior to switching to 8 and is his current jersey number with Real Betis—has also been employed by neo-Nazi and white nationalist groups. (As above, 1 refers to the letter A, 8 represents H, and so 18 equals “AH” or “Adolf Hitler.”) Zozulya’s Twitter handle is also @zozulyaroman18.

It’s less of a clear connection, but on more than one occasion Zozulya has tweeted approvingly at accounts using the logo of CasaPound, an Italian neo-fascist political party. He also follows what appears to be CasaPound’s Ukrainian and Russian language account on Twitter.

And then there are the photos on Zozulya’s social media accounts showing him with images of Stepan Bandera, the founder of the Organization of Ukrainian Nationalists, a political and military group that collaborated with and fought alongside the Nazis during World War II.

Bandera was undeniably an anti-Semite. Under his command, the OUN conducted a campaign of ethnic cleansing which led to the slaughter of 100,000 Poles and so terrorized the Jewish population that they went to the Germans for protection. Even before the fighting with Russia began, Bandera was in the process of being revived as a political icon and nationalist hero by Ukrainians, with his war crimes and bigotry either whitewashed or crammed down the memory hole.

Real Betis’s far-right ultras have also taken up Zozulya’s cause. Vocativ exchanged Twitter direct messages with a leftist Betis supporter who has been tweeting out screenshots of Zozulya’s social media posts and making the case that he holds common cause with Nazis. This individual declined to give his name, citing multiple threats leveled by far-right Betis ultras both online and off.

He also noted that far-right Betis ultras are defending Zozulya, as was reported in the Spanish press. Specifically, when Zozulya was deliberating with his representatives at a hotel in Sevilla, members of Supporters Sud, far-right Betis ultras, gathered outside and sang, “Franco lives, the fight goes on!” A clear reference to Spanish fascist dictator Francisco Franco, whose brutal regime killed some 20,000 to 40,000 people and aided the Axis powers during World War II.

In response to these allegations of fascist sympathies, Zozulya has claimed, specifically in an open letter published on Rayo’s website, that he has “no links to any paramilitary or neo-Nazi groups,” adding that he shares Rayo supporters’ political ethos, pointing to the funds he’s raised to aid volunteer forces in Ukraine.

The latter is undoubtedly true. He created a foundation called Narodna Armiya (“the People’s Army”), which provides non-lethal aid to the volunteer militia groups fighting in the Donbass region of Ukraine. Narodna Armiya makes frequent use of an image of Zozulya on its various social media accounts and Zozulya often shares photos of himself standing arm in arm with soldiers

Zozulya has also auctioned off medals he’s won and a jersey autographed by Lionel Messi to benefit the children of fighters in the Ukrainian conflict. He’s also used the funds raised by auctioning off his own game-worn jersey to help Ukraine’s 25th Air Brigade and even donated a drone to the cause. Given the fact that groups such as Azov Battalion have been officially made part of the Ukrainian army, Zozulya’s claim that he harbors no allegiance to or sympathies with far-right or anti-semitic causes rings contradictory at best and deceitful at worst.

In Spain, the question of Zozulya’s true political leanings remains an open debate. His teammates have stood by his side, calling the circumstances surrounding his eventual exit from Rayo a “public lynching,” while Rayo supporters have not backed down. Rayo’s owner, Martin Presa, admitted there might have been philosophical differences that made the fit a poor one. Pablo Iglesias, the secretary general of the Spanish political party Podemos, didn’t mince words: “[Zozulya] was a neo-Nazi,” he said.

When presented with the images and posts showing the links between Zozulya and far-right groups, Adrian Bonenberger, a U.S. Army veteran and journalist who has extensively covered the war between Russia and Ukraine, said that they are an example of unambiguous support. However, while Bonenberger admits that Azov Battalion’s goal is to build a quasi-fascist state modeled on the principles of national socialism, the many Azov members he’s interviewed wouldn’t consider themselves anti-Semitic, ubiquitous presence of Nazi imagery and iconography notwithstanding.

“They don’t understand what that means,” Bonenberger said. “As crazy as it is to say that. And that’s not just Ukraine. That’s Poland. That’s even Russia. You will find these people, the hopheads, the soccer ultras who have swastikas, who have this weird shit, because to them it’s part of an aesthetic.”

That assertion was echoed by Hannah Gais, a writer and journalist who covers Eastern European far-right groups.

“Anti-Semitism just isn’t viewed the same way as it is here, or for that matter, in Western Europe,” she said via email. “Even the idea that there was something unique about the extermination of the Jews by the Germans during WWII in the East was an idea loathed by the Soviets—and that influence can be felt to this day.”

An interview Bonenberger conducted with Azov founder Andriy Biletsky led to a similar pattern of denials and self-justifying rationalizations.

“When we were talking about the rune symbols [in Azov logos], he said that it wasn’t [the Nazi] SS lightning bolts, it was ‘one nation’ in a badass rune setting,” said Bonenberger in a follow-up email. “I’d heard that before, so I said, ‘Yeah but you get that it looks like SS lightning bolts, right? I mean, isn’t that a bad look internationally?’ [Biletsky] got a bit defensive and said something to the effect of, ‘We’re not letting the west or Russia or anyone tell us how to look or what symbols to use. We’re done with that.’”

The idea that the defining events of the 20th century could be viewed as a matter of opinion may scan as implausible, but according to Bonenberger, that’s very much the reality in Ukraine. The same holds true when it comes to a Nazi collaborator like Bandera. Despite a verifiable record of his acts of brutality and hatred, that history doesn’t exist for most Ukrainians.

“I think if they did—if they really understood what [Bandera] did—not in it’s context, but flat out what he did, they’d be pretty horrified too,” he said. “I’ve talked with intelligent, well-read, well-educated people [in Ukraine] who will say, ‘That’s Russia’s version of history. If you’re telling me that Bandera was bad then you’re a useful tool of Russia…’ This is one of the problems you experience when few facts are viewed as credible.”

Bronenberger further explained that some Ukrainians will often select the most self-flattering option when it comes to matters of history—especially now, while the nation is facing an existential threat in Russia—no matter how ugly that option may seem to outsiders. If that means worshipping Bandera as a beloved freedom fighter or pretending that Nazi symbols can represent anything but anti-Semitism, so be it.

“The longer they spend away from [factual accounts of history], the more questionable the choices many of the people will end up making, more or less out of ignorance,” he said. “I try to tell them about [the history of the Holocaust]. What we should do is explain that you need to see why this is not acceptable.”

Most will come around when presented with the facts, Bronenberger said, “And the few who don’t you can be like, ‘Hey, you know what? You’re a Nazi.’”