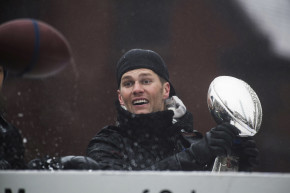 Our long national nightmare is over: The FBI found Tom Brady’s missing sports clothes. This morning, news leaked that authorities found Tom Brady’s Super Bowl LI game jersey in Mexico. It was reported missing soon after he led the New England Patriots to a historic, 25-point comeback win against the Atlanta Falcons.

According to a statement from the NFL, the feds spent time, effort, and money (Not their money! No. No no no no no no. Your taxes.) working with law enforcement to find Brady’s jersey from Super Bowl LI as well as the jersey from when he defeated the Seahawks in XLIX. The feds found it on “foreign soil” and according to NFL PR representative Brian McCarthy, a “credentialed member of the international media” possessed the clothing. Ken Goldin, an auctioneer, estimated that the jersey could be worth up to $500,000.

Fox Sports’ Jay Glazer shared video footage of the credentialed press authorities are eyeing as the suspect during an appearance on The Herd earlier today.

In spite of the jersey’s market value (even if fans and auctioneers arbitrarily value said mesh fabric by its proximity to Brady’s sweat), it’s more than a little bothersome that the government traversed across the border to find Brady’s personal possession. Why chasing a collectible was of such interest seems difficult to answer.

Here’s what we do know: the FBI is an enormous, opaque bureaucracy, but they did do some real hustling just to reclaim a celebrity’s gym bag. There are no victims and no serious threats to our national security that run adjacent to this crime, just a man worth $180 million in search of a pricey memento. Meanwhile, the Trump administration has a planned $249 million budget increase to the FBI alongside substantial cuts to virtually every other government agency (including outright eliminations of relatively inexpensive budget items like the National Endowment of the Arts and free broadcasts of Ken Burns and Big Bird.)

Only God and Comey know how much time or money the FBI spent taskrabbiting for Brady, we may never know since they’re notoriously slow to respond to Freedom of Information Act (FOIA) requests, and recently required future requests to be sent via fax. But we can only wonder what increasing federal tax allocation towards stupid things like this might bode for the future of the Bureau.

If Bill Belichick loses his gum abroad, will the feds send attack drones until the Juicy Fruit is found? Maybe, while they’re at it, they can travel land and sea to find out where Sidd Finch is hiding?

Is this why we can’t afford Meals on Wheels?