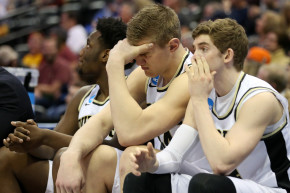 According to the Associated Press, their ranks swelled to a few dozen as the afternoon went on. They planned to hang around long enough to make a stink or at least ensure that members of the press were around to give oxygen to their racist idiocy, but the Secessionists were told to move 50 feet away by the police due to safety concerns. The flag was lowered by 6 p.m.

Greenville was chosen as host after the NCAA removed all championship events from North Carolina in 2016. The decision was made in response to the state’s passage of HB2, a bigoted piece of anti-LGBTQ legislation that requires trans people to use public restrooms corresponding to the gender on their birth certificate and lifted statewide anti-discrimination laws.

Mind you, South Carolina had been subjected to its own NCAA event ban from 2002 to 2015 for continuing to display the Confederate flag at the statehouse. (The Confederate flag was taken down in 2015 following the brutal mass murder of nine African-Americans in a Charleston church by a white supremacist. Dylann Roof. The NCAA lifted the ban shortly thereafter.)

Nic Jones, a reporter for a CBS affiliate in Columbia, SC, got one of the protesters to unpack the South Carolina Secessionists’ reasoning. And boy, they’ve got some takes.

One person part of the group that put the Confederate Flag up near the Bon Secours Wellness Arena talked about their reasoning for doing so. pic.twitter.com/WnR8SUnq9u

First, this unnamed individual said he and his fellow activists were angered by the NCAA’s return to South Carolina after a 13-year absence, calling it a “political maneuver” that has only served to besmirch the good reputation of the Confederate flag.

“The last two years, that flag’s been demonized,” He said, “Our confederate veterans been vilified. So we want to make sure if they’re gonna come to our state make money. they get to see a flag that’s still, you know, symbolic for a lot of our people.”

And what does it symbolize? Not racism and the centuries-long and ongoing oppression of black citizens, of course.

“We’re trying to, number one, reclaim that symbol,” he said, and while he understood how someone–anyone with a passing knowledge of U.S. history–might take umbrage, they’re just not getting what the Confederate flag is really about.

“Anybody that uses that flag acknowledges that it’s been misused to intimidate people and spread hatred of people, but that’s not the original meaning of that flag,” he said. “It represents 260,000 Southerners who gave their life in service to their state. 20,000-plus South Carolinians. You know, I’m a veteran. I take it personally when you say soldiers fought for this cause or that cause. Soldiers fight because they’re told to. Confederate soldiers are no exception to that.”

Oh, so they were Just Following Orders? Cool. The Nuremberg defense has always held up well. They’re also peeved that the Confederate flag hasn’t been displayed in the state’s Relic Room, though he seemed unaware that doing so has not only caused attendance to dwindle, but would cost approximately $3.6 million.

He further promised that the South Carolina Secessionist Party would continue to haul ass around the state and bug people attending any and all upcoming major tourist events, because there’s no sounder, more persuasive pro-secession argument than brandishing the Confederate flag.

In response, the NCAA issued this statement.

NCAA statement on the confederate flag outside the Greenville arena. pic.twitter.com/r1I9TJiW2n