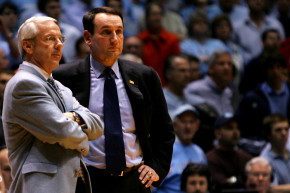 It's rare consensus from both sides of the Duke-UNC aisle

At first blush, it would appear that Duke basketball coach Mike Krzyzewski doesn’t understand the meaning of the world “political.” While preparing to coach Duke’s first-round March Madness game in Greenville, S.C., a reporter asked if he had any “sadness” about not playing the game in the originally scheduled site of Greensboro, N.C., before the NCAA relocated the game south of the Carolina border because of HB2, the discriminatory transgender bathroom bill.

As part of his initial answer, Krzyzewski said, “It would be nice if our state got as smart and also would host not just basketball tournaments but concerts and other NCAA events. But maybe we’ll get there in the next century, I don’t know. We’ll see.”

That’s already some biting commentary from the famed Coach K, who called HB2 “embarrassing” last summer and whose C.V. of five national titles at Duke and three Olympic gold medals with Team USA grants him significant leeway in the court of public opinion.

When the next query at the press conference wondered what the solution to North Carolina’s loss of hosting privileges, Krzyzewski replied, “I don’t want to get political right now.”

At first blush, it appears the coach may not understand what the word “political” means, given his preceding response, but one could read into the answer that the question of transgender rights is not one of politics, but of basic human rights. (South Carolina, it’s worth noting, was barred from hosting NCAA events for 14 years so long as the Confederate flag flew at the capitol, but it came down in July 2015.)

Another journalist preceded the next question with the phrase “following up,” but Krzyzewski interjected and said, “Look, it’s a stupid thing. That’s my political statement. If I was president or governor I’d get rid of it. And I’d back up my promises. As unusual as that might be. Anyway, I don’t want to get too political.”

The only topic as contentious as politics in North Carolina is the Duke-UNC college basketball rivalry, meaning Tar Heels coach Roy Williams might be the state’s only public figure who carries comparable clout to Coach K. Williams appeared in the same media room on Thursday and predictably was asked about HB2 as well.

That’s actually more tepid than his comments a month prior, when he called HB2 “ridiculous” and “stupid.”

There’s little commonality among Duke and UNC fans, but there’s consensus among their basketball coaches: HB2 is stupid.