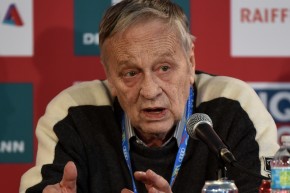 He apologized, but dang, why did he take it there in the first place?

International Olympic Committee board member Gian Franco Kasper had a take on the possible ban on Russia participating in the 2018 Olympic Games. The Swiss official compared the ban’s unjustness to that of the Holocaust. Capital H. That one.

Kasper apologized for the “inappropriate and insensitive” analogy between Russian athletes getting temporarily punished for subversion of Olympic anti-doping rules and the defining atrocity of the 20th century.

“I’m just against bans or sanctioning of innocent people,” Kasper originally told his colleagues, which is cool with me. Same TBH. He kinda lost the crowd when he started name dropping Adolf Hitler though.

“Like Mr Hitler did, all Jews were to be killed, independently of what they did or did not do.”

Beyond the obvious exaggeration, the internal logic of his analogy is something else. If we’re to take this at face value, it presumes that some Jews did do something that merited an indefinite imprisonment and execution. When people pushed back on this comparison, Kasper stubbornly responded, “Why not? Of course it’s more extreme,” which, after the whole Nazi thing, was a whiplash of an understatement. “But just the fact that the place you come from makes you guilty, I’m not okay for this, really not.”

Kasper was an early doubter of the McLaren Report detailing the institutional measures Russia put in place to evade positive tests, which stood in stark contrast to the IOC’s initial statement.

While there’s little reason to regurgitate all the reasons your problem probably isn’t worth analogizing to the Holocaust, it’s worth sharing that Nazi soldiers are often credited as early adopters of performance enhancing drugs. In “A Global History of Doping in Sport: Drugs, Policy, and Politics,” authors John Gleaves and Thomas J. Hunt write that the Nazis experimented with the amphetamine Pervatin as early as 1937. While evidence that they committed to Pervatin or other PEDs is unclear, their pursuit of a drug-induced medicinal benefit was done to help accomplish their military goals, like presumably, facilitating the Holocaust. The actual Holocaust.

Kasper, who is 73, was born shortly before the end of World War II, which means he grew up around people that saw the horrors of Holocaust and the war. But, hey, he’s sorry.