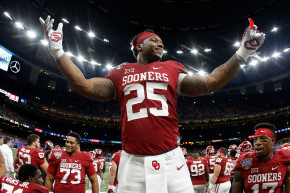 Joe Mixon Shows The NFL Cares About PR, Not Violence Against Women
By Robert Silverman

Joe Mixon Shows The NFL Cares About PR, Not Violence Against Women

In six weeks, the NFL will hold its annual draft, an overproduced, deeply boring affair that receives three days of nonstop coverage sandwiched by months of pre-draft analysis, mocks, and post-draft analysis because the NFL content machine never stops. A big chunk of the pre-draft coverage is devoted to both on and off the record whispers from NFL front offices and player agents, all of whom would like to spread misinformation about which players they’re eyeballing and/or to boost the stock of their clients.

Which brings us to Joe Mixon. In 2014, Mixon assaulted a fellow University of Oklahoma student. He received a reduced sentence and sat out for a year, but the tape showing the brutal assault against the female student was not made public until December 2016. The prevailing wisdom was that visual evidence—not the criminal act itself—showing him breaking multiple bones in his victim’s face would cause Mixon’s name to be wiped off of some teams’ draft boards altogether.

But according to Bleacher Report, that may not be the case.

Not only is his draft stock improving, but some teams say no player is moving up draft boards faster than Mixon. Apparently he’s checking every box as he meets with various franchises.

Mixon might now go as high as the second round. Some even believe the late first round is in play. (Still, remember the first rule of Draft Club [that teams and players lie].)

There are still teams who are highly uncomfortable with Mixon being drafted at all, let alone in higher rounds. Some of these teams are outraged by the idea of a team selecting a player who hit a woman. No one is saying he shouldn’t be allowed to play in the NFL. They just don’t want him drafted.

A 2016 change in NFL rules prohibiting anyone convicted of sexual assault or domestic violence prevented Mixon from attending the NFL Draft Combine, but since his college career came to an end, Team Mixon has been working feverishly to rehab his image and assure NFL teams that important lessons have been learned and personal growth has been achieved. In an interview with Albert Breer at the MMQB, an Oklahoma assistant coach waxed poetic about him, because Mixon is his daughter’s favorite player. Mixon’s agent did a radio spot where he went on and on about the good that can be extracted from the tape, calling it “an educational tool.” And that’s beyond the character-polishing offered up by Brent Musberger during the Sugar Bowl.

If recent draft history proves precedent, it’s hard to say exactly where Mixon will land. In 2016, Tyreke Hill received three years’ probation after beating up his then-girlfriend, was booted from the Oklahoma State Cowboys, and tumbled down to the fifth round. He had a boffo season which led to quite a few thinkpieces fretting about whether enjoying Hill’s play was an act of moral transgression. That same year, the Los Angeles Rams plucked tight end Tyler Higbee in the fourth round, despite allegedly assaulting Nawaf Alsaleh and shouting, “ISIS these nuts,” and “Fuck you, go back to your country” just 12 days before the Draft. The NFL’s own website called the selection of Higbee a potential “steal.”

Shawn Oakman, who was charged with second-degree sexual assault, went undrafted in 2015 despite ranking as a top-100 pick. Former Baylor head coach Art Briles called him “humble” and said (here’s that word again), “Whoever gets him, they’re getting a steal in the draft, I can promise you that.” The Seattle Seahawks were fine with taking Frank Clark in the second round in 2015 even though he’d pled guilty to disorderly conduct three weeks prior to the draft, a reduction from the original charge of misdemeanor assault and domestic violence.

Mixon is indeed a talented football player, but whether or not he’s actually made some serious changes in his life is something no amount of delving by NFL personnel officials can be certain of. The question of where he might land has nothing to do with any real concern about domestic violence either way.

The league office is watching this situation closely. They may deny this, but based on interviews I’ve done, the NFL doesn’t want Mixon drafted either, feeling it would undermine the league’s efforts to curb violence against women.

Here’s what the NFL is doing to curb violence against women: nothing. Or rather, they’re not accomplishing anything other than mounting a vigorous public relations campaign, which is really all the NFL is equipped to do. Hoping that NFL teams de-facto blackball Mixon because they don’t want to read some angry blogs is about the most NFL way of thinking imaginable, and more importantly, it will only make things worse for future victims of domestic violence.