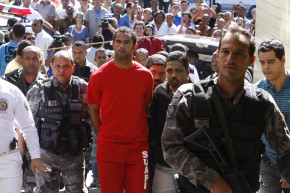 Bruno Fernandes, who fed the remains of his ex-lover to dogs, now has a goalkeeping job somehow

Brazilian soccer goalkeeper Bruno Fernandes, best known simply as Bruno, was convicted for ordering the kidnapping, torturing, killing, and dismembering of the mistress, Eliza Samudio, who bore his child. Bruno then fed her remains to dogs. He was sentenced to 22 years in prison at his sentencing hearing, during which Judge Marixa Fabiane Rodrigues Lopes reportedly told him, “Your personality is distorted and evades the minimum standards of normalcy. The guilt from these crimes is intense and highly reprehensible. The execution of the murder was meticulously calculated.”

The death of Eliza Samudio happened only seven years ago, yet Bruno—even though he confessed to being complicit in the crime—has been released from jail on a technicality as the Brazilian courts reportedly were too slow to act on his appeal. He remains guilty, with two-thirds of his sentence remaining.

And now Bruno is back in the ranks of professional soccer after second-division Brazilian club Boa Esporte made the unconscionable decision to sign the convict to a two-year contract, a term length that’s awfully optimistic given the chance Bruno’s release will not last.

“You have to show people that what Bruno did wasn’t correct, but that he has the right to return to society,” Moraes told a news conference, adding: “I am someone who likes a challenge. Boa is not doing anything wrong, Boa is not a court of justice, Boa is an entity in the world of sports. And Bruno knows how to play football.”

While giving folks second chances is all well and good, playing professional sports is a privilege, not a right, and the barbaric and heinous nature of this particular incident should bar him from returning to soccer, especially in light of the circumstances that led to his early release. Yet there he was at the announcement of his contract, all smiles, joined by men with thumbs up.

At least four club sponsors, including primary backer Gois and Silva, have withdrawn support over the signing of Bruno.

Bruno wouldn’t answer any questions not directly pertaining to playing soccer and reportedly said, “People run from me because of what happened in the past.” That statement is actually correct and completely justified on the part of the people. There’s already been speculation about the Brazilian national team needing an upgrade in net, and Bruno said that remains his goal.

“Dreaming is never too much,” he told reporters. “Bruno is alive because of his dreams. Once I dreamed about returning here, and now I have the opportunity.”

What about Eliza Samudio’s dreams? Or the four-month-old boy who was orphaned because Bruno orchestrated the murder of her mother?