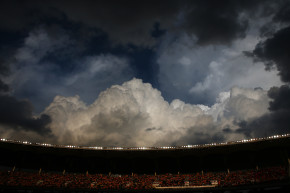 Baylor Had Yet Another Awful Day
By Bradford William Davis

Baylor Had Yet Another Awful Day

It's almost like becoming a corrupt institution invites consequences

Baylor yet again has found itself dealing with a fresh batch of shit. For starters, former player Tre’Von Armstead and now-former coach DeMarkco Butler were involved in distinct, yet totally on-brand controversies. Both stories broke on Monday within hours of each other. Both don’t do much for the school’s already rightfully wrecked reputation.

First, Armstead—a name you may remember for being one of the first Baylor football players accused of rape during Art Briles perverse and scandal-ridden coaching run—allegedly attacked a woman before kicking out a cop car window while police attempted to place him under arrest. He was charged with battery, domestic violence, resisting arrest, and damaging a police car.

Armstead and the woman got into their altercation at the Cromwell Las Vegas Hotel and Casino. LVPD Officer Laura Metzler confirmed in a statement obtained by ESPN that the former tight-end, listed at 6’6” and 280 lbs, pushed her in front of the building. Based on the domestic classification, Armstead and the woman likely had some prior relationship.

Again, the fact that Armstead is still out on the streets assaulting women may very well be its own controversy. When he got accused of raping a fellow Baylor student, an incident his accuser claims occurred on April 18, 2013, Baylor failed to investigate the claims immediately, instead opting to determine what happened that night almost 29 months after the alleged rape. (Baylor’s lack of haste violated a Title IX requirement that colleges and universities investigate rape allegations promptly.)

Instead of getting the sort of discipline he needed, Armstead was quietly dismissed from the team and expelled from the college. It’s very likely that another woman has paid for Baylor’s negligence.

So, surely Baylor would put extra effort into keeping its nose clean? Loyal False Start readers know the answer, and thus, are wholly unsurprised that new director of basketball operations, DeMarcko Butler, was fired for sending inappropriate messages to a teenager, as KWTX reported last night.

According to a school official, the teenager is of legal age according to Texas law. Athletics spokesperson David Kaye wrapped a neat Baylorfied bowtie around the controversy by telling KWTX in an opaque and on-brand non-statement: “As a personnel matter, we have no further comment.”