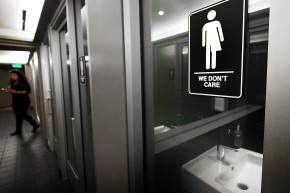 Maybe North Carolina legislators could make better use of their time

A bill filed on Monday in the North Carolina House of Representatives calls upon the Internal Revenue Service and the U.S. Department of Justice to take a serious look at the non-profit status of the NCAA and Atlantic Coast Conference. It’s a bit of legislative stagecraft that shows how North Carolina’s transphobic HB 2 law has left the state’s representatives tilting at windmills.

In response to the passing of HB 2, which barred trans people from using public restrooms that corresponded with their gender identity and gutted protections against anti-LGBTQ discrimination, both the NCAA and ACC announced in September 2016 that they’d rather hold a bunch of postseason tournaments in a slightly less bigoted state than North Carolina. If HB 2 remains the law of the land, North Carolina could find itself NCAA sports-free through the year 2022.

In the mind of Republican representative Mark Brody, those actions violated IRS rules against lobbying by a non-profit. (They don’t.)  Still, on Monday, he filed House Bill 328, or, for those who need a more talking point-friendly name, the “Athletic Associations Accountability Act.”

The bill makes the claim that the NCAA and ACC have used their financial clout to engage in “economic retaliation” and, not just regular old everyday lobbing, but “excessive lobbying.”

As such, if HB 328 passes, the North Carolina General Assembly would formally request that the Federal government take a gander at this and see if maybe it might want to take some unspecified action. (They won’t.)

Brody took to Facebook on Sunday night to argue for the merits of the bill.

“There comes a time when the citizens of North Carolina need to stand up and say “Enough of this foolishness”!” [sic] he wrote. Brody then regurgitated the basic language contained in the bill, ending his Facebook rant with this thundering, not-at-all self-flattering kicker: “I believe the NCAA and the ACC have stepped out of bounds and, to the best of my ability, will never allow the General Assembly to relinquish its legislative authority over the internal affairs of the State or succumb to economic extortion to and from either the NCAA or the ACC.”

Just to be clear, IRS regulations do prohibit non-profits from lobbying for specific legislation or a particular candidate, but neither the NCAA nor the ACC have done this at all. There have been no public statements made to the effect of, “Repeal HB 2 and we’ll come back to North Carolina.” It’s certainly implied, but even a statement like this—issued in December 2016 when it seemed for a hot minute that HB 2 would be repealed—doesn’t cross the IRS’s line.

The NCAA and ACC are acting as independent capitalist entities that can choose where and when to hold sporting events. That’s pretty much the definition of their charters. But it’s always nice to see a small-government conservative go running to the Feds when things don’t go their way.

A few North Carolina politicians on the other side of the aisle were gobsmacked by the bill.

“It’s rather startling. I’m not familiar with any state initiating an investigation by the Internal Revenue Service into whether an entity is engaged in proper conduct,” State Senator Floyd McKissick Jr. told WNCN, a CBS affiliate in North Carolina. “It’s like trying to persecute the messenger rather than trying to listen to the message.”

This is not helpful. Legally we have no case and strategically we have no leverage. Nothing to gain by poking the ACC right now. #ncpol https://t.co/wFlpV1Dq6v

Brody also told a Charlotte NBA affiliate that if and when the bill passes (it probably won’t) and the IRS finds that the NCAA and ACC were in violation of IRS rules (they aren’t), North Carolina might sue them. Good luck with that, Rep. Brody.