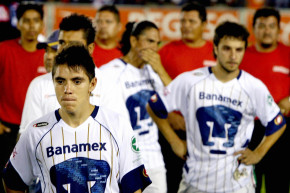 Violence against referees is just the beginning

Mexican referees are on strike after two violent, on-field altercations against officials were met with inadequate discipline. Late last week, the referees’ association, La Asociación Mexicana de Árbitros, first voiced a threat to strike after a series of violent actions against their officials. In one clash, players for Club Toluca shoved a ref while arguing a call. In another, America player Pablo Aguilar apparently thrusts his head at an official.

Two instances of players failing to keep their hands and foreheads to themselves, hours apart from each other, provoked the association to seek severe disciplinary action against the players. Instead of dishing out the maximum one-year suspension allowed, the league offered tame eight and 10 match suspensions for each incident. It was just about the opposite of having a strong and symbolic statement against referee violence, and so, the refs refused to officiate last weekend’s matches, forcing a leaguewide postponement.

Deterring violence against referees is no small matter. Last November, a referee got headbutted after giving a red card during an amateur Mexican soccer game. That red card cost inadvertently cost referee Victor Trejo his life—he collapsed and died on the field while the player ran away.

This is almost certainly fresh on the mind of the referees’ association, along with their ongoing requests for a wage increase.

While refs will probably always have an adversarial relationship with the people they call fouls on, the referee strike draws common ground both parties have with Liga MX’s behavior. Liga MX players are fighting battles of their own–star Atlas and national player Rafa Marquez is working on forming a player’s union. Players have reported being paid late by their clubs, as well as the so-called “Gentleman’s Pact” that permits players to get transferred to other teams without their consent. It’s bad all around.

Still, players have yet to formalize a work stoppage in spite of their persistent complaints and obvious mistreatment. Before the Atlas season opener, Marquez told the press that “[The owners] treat [the players] however they want and some [players stay silent to] try to keep their jobs and not make things worse.”

If the referees have enough power to cancel an entire weekend of Liga MX games, how much more could the unified players do? They know as well as anyone that at the end of the day, they’re the ones that bring the fans in.

Just be nicer to the refs. Y’all are in this together.