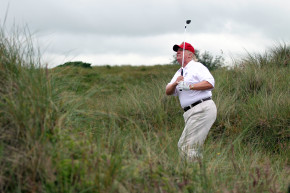 On Sunday, an unnamed environmental activist group broke into the Trump National Golf Club in Rancho Palos Verdes, CA—one of the many golf courses which President Donald Trump still owns and profits from – and committed an act of civil disobedience.

Four individuals calling themselves the Anonymous Environmental Activists Collective decked themselves out in hoodies and masks and jumped a low fence. Arriving on the fifth hole of the 7,300-square-foot course, they carved “NO MORE TIGERS. NO MORE WOODS,” in six-foot tall letters.

As first reported by the Washington Post, the group said they were driven to act in response to the devastating environmental policies that have been set in motion during the Trump administration’s first two months.

“In response to the president’s recent decision to gut our existing protection policies, direct action was conceived and executed on the green of his California golf course in the form of a simple message: NO MORE TIGERS. NO MORE WOODS,” the statement said.

Trump administration officials have not responded to a request for comment. According to the Los Angeles Times, the sheriff’s department received a call at 8:30 a.m., though the individual who placed the call had a change of heart, trying to dissuade officers from showing up at Trump National and investigating.

This is not the first time the course has been the target of activists. On December 24, 2016, Black Lives Matter protesters walked into Trump National’s exclusive clubhouse and began belting out anti-Trump Christmas carols to club members that were chowing down on brunch.

Though the Anonymous Environmental Activists Collective did not unpack the kind of clumsy Tiger Woods-slash-environmental destruction pun in their message, one member told the Post, “Tearing up the golf course felt justified in many ways. Repurposing what was once a beautiful stretch of land into a playground for the privileged is an environmental crime in its own right.”

Correct. Though golf is not a sport, a study conducted by Audobon International estimated that a large course situated in a part of the country hampered by desert-like conditions will suck down one million gallons of water per day, or as much as a four-person family does over the course of four years.

Meanwhile, EPA administrator Scott Pruitt, using the kind of logic-befouling language that has become the hallmark of the Trump administration, recently said that carbon emissions are not the central cause of climate change. That is false.

Oh, and it’s fine for coal companies to dump waste into rivers and streams. Even better, natural gas companies will be permitted to blast methane into the atmosphere, the EPA is facing a reported $2 billion cut to its annual budget, Obama-era pollution standards for cars are being loosened, and Obama’s Clean Power Plan, which regulated emissions from power plants, will soon be wiped from the books. According to Forbes, that repeal alone will cost taxpayers $600 billion and kill over 120,000 Americans by 2050.

There’s more, if you really want to feel profoundly depressed on a Monday morning, like the fact that for the second consecutive year, the rate at which carbon dioxide emissions grew matched record highs and the Great Barrier Reef is practically dead. And that’s before Marmalade Mussolini’s planet-destroying policies begin to have any impact.

In short, we’re fucked. So if you find yourself clutching your pearls about a minor act of vandalism, maybe focus on the real criminals instead. You can watch a short clip of the good and cool environmental activists in action here: