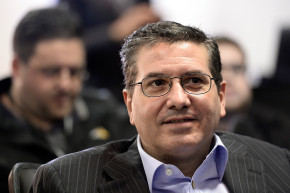 On the first day of free agency and a month before the draft, Washington’s NFL team—fresh off its first back-to-back winning seasons in two decades—fired its general manager, Scot McCloughlan.

McCloughlan has been conspicuously absent from NFL activities such as the Scouting Combine and, while the official team statement from Bruce Allen was boilerplate dismissal, an anonymous team official immediately leaked the franchise’s side of the story to the Washington Post.

“He’s had multiple relapses due to alcohol,” a team official told the Post. “He showed up in the locker room drunk on multiple occasions. . . . This has been a disaster for 18 months.”

To balance the ledger, it needs to be noted that the same Post report included mention that none of the six players the newspaper reached ever saw him drink in the locker room and only one apparently ever saw him when he wasn’t composed.

“I don’t know what their issue is with him,” one player told the paper, “but all the players love Scot.”

His agent, Peter Schaffer, told the Pro Football Talk Live radio program on Thursday that alcohol was not the reason for his client’s recent absence and that the GM was “very healthy.”

McCloughlan previously has been open about his alcohol issues. He left two prior front-office jobs with San Francisco and Seattle and frankly told ESPN The Magazine’s Seth Wickersham shortly before Washington hired him: “I had a drinking problem. I’m a good person. And I know how to run a team.”

In Washington, McCloughlan appears to have been set up to fail given the can’t-help-themselves meddling from owner Dan Snyder and team president Bruce Allen, despite such protestations as this at the time of his hiring:

New #Redskins GM Scot McCloughan told by Dan Snyder that owner is embarrassed and just wants to win, that he and Bruce Allen won't interfere

It’s difficult and irresponsible to speculate on whether McCloughlan did or did not let drinking affect his job here without knowing any facts. It’s also unfair that the organization went public with this beyond the shield of anonymity. It’s perhaps most unfair that the Washington Post is using anonymous team sources to publicize the team’s version of the story, especially since the team’s version is that McCloughan is a relapsing alcoholic.

What can be objectively discerned is this: In McCloughlan’s first season in 2015, Washington won only its second NFC East title since 1999, and the club had not had consecutive years over .500 since the 1996-1997 seasons when it had identical 9-7 and 8-7-1 records as it did in 2015-2016. A key reason for the turnaround was McCloughlan’s willingness to promote quarterback Kirk Cousins over former No. 2 overall pick Robert Griffin III.

If it weren't for McCloughan, Skins would have started RG3 in '15. No back-to-back winning seasons. Risked job to make a stand for Cousins.

McCloughlan obviously owed the franchise his best efforts and should have been held accountable to the contract he signed, and it’s unclear what his behavior exactly entailed. He may well have fallen short of that standard. But Washington’s anonymous leaking of damaging information—even months in advance—is reprehensible.

Was told late in the season of jealousy up top and how they'd one day use McCloughan drinking as an excuse to can him. Exactly what happened

Source who knows Skins brass told me months ago this was EXACTLY how it would end. It was most cynical thing I'd heard. Then it happened.

Washington was already seen as a poorly-run franchise, but this recent move is only going to hurt them more.

All I can tell you is people in front offices around NFL are strongly defending McCloughan to me. They are absolutely shredding Washington.

McCloughan's ex-colleagues in SF/SEA are furious. He's that well-liked. He owns his past. The struggle is real. But that building …

Given that Washington has reportedly dismissed McCloughlan for cause in order to avoid paying him the final two years of his contract, this dispute may not be over. There’ll likely be legal challenges from the now former GM to recoup his lost earnings.

In the end, the franchise whose very team name is too toxic to print is just not a suitable place to work, either. Brewer called it full of “office politics and backstabbing and knack for self-destruction” and “an atmosphere that would drive most to drink.”

Most teams are busy signing free agents. Redskins are busy firing their GM, who everyone who worked and played for him respected.

Scot McCloughan is an elite evaluator of talent. True football man. No surprise those traits might lead to his demise in Washington