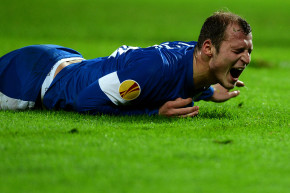 A misidentified t-shirt and some botched reporting has lead to a Ukranianian soccer player being branded a neo-Nazi, according to ESPN FC. In August 2016, forward Roman Zozulya joined Real Betis Balompié, a La Liga club in Sevilla. Upon arriving at the airport he was photographed wearing a shirt that features the Ukrainian crest. Multiple reports, however, misidentified the logo as belonging to Pravyi Sektor, a far-right, neo-fascist Ukranian political party.

ESPN FC was not able to determine exactly who was first to press publish, but by their best estimate, it was originally written up by El Correo. El Correo has since deleted their article at Betis’s request and did not respond to ESPN FC’s request for comment. That didn’t stop multiple sites from  aggregating and reblogging it, however, and many remain uncorrected.

Just so we’re clear. ESPN FC calls the inaccurate stories about Zozulya “fake news.” That’s a rather broad application. Someone botched the story, presumably in good faith, and a bunch of other sites jumped on an easy, sensationalistic headline without checking to see if the facts bore out. But by all the available evidence, it was not the product of Macedonian teens knowingly putting out a clickbait-friendly lie, i.e. “fake news.”

In January, Betis agreed to loan Zozulya to Rayo Vallecano, a second division Spanish club near Madrid, where he hoped he could gain more consistent playing time without having to uproot his wife and newly-born second child.

Rayo’s “interventionist” supporters, though, largely far-left and proudly working-class, were less than thrilled. According to ESPN, it’s not just the Bukaneros ultras—who show up to the stadium wearing Che Guevara-emblazoned shirts and shout while dancing, “Whoever doesn’t bounce is a fascist,”—who took issue with Zozulya’s presence on the roster.

On Feb. 1, he arrived at Rayo’s home stadium, Vallecas. It was his first day. As he walked in, fans shouted profanity at him. Graffiti covered the stadium’s walls. One message read, “VALLEKAS EN PIE DE GUERRA” (Vallecas is at war). Another read, “FUERA NAZIS DE VALLEKAS,” (Get away from Vallecas, Nazis). During Zozulya’s first training session with Rayo, a group of fans broke into the stadium and held up a similar sign, yelling at Zozulya all the while.

“He was in a state of shock,” Zozulya’s agent, Jose Lorenzo, said in an interview. “It was vile.”

The situation was so dire that the riot police had to be called in and Zozulya left the team, returning to Sevilla and fearing for his family’s safety. He’d previously explained his political inclinations to Rayo supporters in an open letter, denying any connections to Pravyi Sektor and stating that while he backs the ongoing Ukrainian independence movement, he’s not a Nazi. Regardless, many Rayo supporters refused to believe him.

One prominent fan group leader told ESPN FC that he has a secret “folder of reports” which contradict Zozulya, though, according to ESPN FC, the contents of that folder have not been widely shared. Another fan said, “I don’t know if he’s a Nazi or not, but I think the majority of the fans, even if it’s not clear, don’t want him to play here.”

And as is the case with many disinformation campaigns, someone will inevitably blame Russia. Anatoliy Scherba, the Ukrainian ambassador to Spain, is doing just that, relaying to Zozulya’s agent that Russian operatives revived the story to smear him, .

Russia is engaged in “hybrid war” against Ukraine, Scherba said, meaning a war that involves both military action and also misinformation or propaganda. Embarrassing and restricting a Ukrainian star athlete such as Zozulya, who turned down multiple interview requests for this story, would be a strategy that fits the latter, Lorenzo said, though he declined to offer more specifics on what Scherba suggested. Multiple calls to the Ukrainian and Russian embassies were not returned.

No one is willing to say exactly how Russia might have fed the information to Rayo’s rabid fan base or can pinpoint any concrete actions taken to revive the original, false story. Now, Zozulya has nowhere to go. Contractually, he can’t go back to playing for Betis and when he arrived at Rayo’s offices to negotiate a buyout, no team officials showed up. Really.

Stunned, they returned to the street only to receive a phone call from a Rayo official, telling them to get in their car and follow a different car parked nearby. They did — catching on that perhaps the Rayo executives were hoping to have the meeting away from the press — but then arrived at a shopping mall, where a meeting with Rayo was held in the food court. (The media also quickly found them)

The buyout was eventually completed, but Zozulya still can’t find a job, even with a Major League Soccer team. This lie traveled halfway around the world, while the truth can’t get one soccer player’s boots back on.