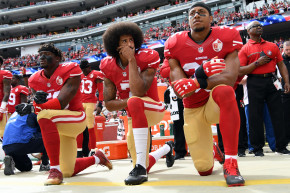 According to Bleacher Report’s Mike Freeman, more than a few NFL general managers, while snagging a few precious minutes of face time with a soon-to-be professional, needed to know what their take was on Colin Kaepernick’s since-ended national anthem protest.

Freeman spoke with multiple NFL agents, though none of them were willing to go on the record, who said this remains a pressing issue for NFL general managers and the wrong answer might send a player tumbling up or down a draft board.

Three agents told Bleacher Report their clients told them teams had asked players about Kaepernick. The agents added that the combine interviews included more political questions than any of them could ever remember. And all the questions, the agents said, focused on Kaepernick’s protest last year or the possibility of future protests by other players.

And if a player was foolish enough to say anything more controversial than, “No Sir. I respect the flag and all it stands for and would never besmirch Old Glory by availing myself of my first amendment rights”?

When one of the agents’ players responded that he agreed with Kaepernick’s protest, he was asked by the team why. Then he was asked if he would ever participate in such a protest. The player said he wasn’t sure.

“Teams are trying to gauge if they would have a potential Kaepernick situation,” the agent said.

As Freeman previously reported with anonymous sources, Kaepernick is loathed by more than a few NFL GMs, some of whom, again, anonymously, vowed they’d never deign to add him to the roster. One even went so far as to place Kaepernick a few rungs below a convicted murderer, Rae Carruth.

So it’s not surprising that they’d be looking to snare any proto-Kaepernicks, or any of the dozens of NFL players who joined him, before they went and wasted a valuable pick. To be clear, this is not about declining TV ratings, which have far more to do with cord-cutters and an eyeball-grabbing (to say the least) presidential campaign than the fans who were so appalled by Kaepernick’s actions that they booted football from their lives for good.

It’s about eliminating what the NFL sees as a “distraction.” They want a grinning Tom Brady, endlessly sloughing off his dopey non-endorsement. Any ideas or thoughts or people who might impede the steady churn of commerce and bring about unwanted media attention must be eliminated, even if it means asinine questions about Kaepernick. Similarly, prior to the 2013 draft, GMs were hell-bent on finding out if Manti Te’o was secretly in the closet and if anyone else at the Combine might be too.

But all of this belies a fundamental flaw in NFL execs’ thinking: cobble together the perfect set of questions or algorithm and it will reveal how a college kid will view the world a few years down the line. People change after they get out of school. They learn a few things about the world and their workplace, which can certainly alter their overall outlook.

Some will find themselves sitting on a boatload of cash and decide that they’d rather not pay a good chunk of it in taxes. Others will suddenly become aware of the fundamental inequalities that are necessary to sustain a capitalist economy. Some won’t care about any of this at all, like Kaepernick himself, who didn’t have a political bone in his body as recently as a few years ago. But none of this can be accurately predicted by the answer given during an extended and kind of meaningless jobs fair. Doubly so when you’re dealing with a 22-year old doing his best to impress a future employer.