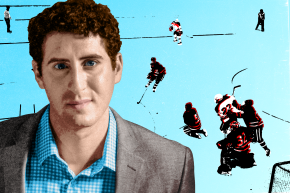 An empty-net goal back on March 19, 2016 from the St. Louis Blues’ alliterative scoring combination of Schwartz from Stasny and Shattenkirk would never have registered in Dan Barbarisi’s consciousness in any other year.

Formerly the Wall Street Journal’s Yankees beat writer, he had not paid any attention to hockey since his hometown Rangers won the 1994 Stanley Cup. Until a few months prior, he had no idea who Jaden Schwartz, Paul Stasny, and Kevin Shattenkirk even were.

But, on that night, the 36-year-old was white-knuckled. So too was his wife, who rummaged through her purse, discovered old Twizzlers of indeterminate provenance, and still ate them to combat her nervous energy. Five months earlier, Barbarisi left his life as a traditional sports reporter and dove head first into the world of daily fantasy sports, immersing himself as a DFS player while researching a book exploring the nascent billion-dollar industry — and quickly ending up a fully obsessive gambler himself, with thousands of his own dollars on the line.

The outcome? Well, you’ll just have to purchase the product of his participatory journalism, Dueling With Kings (released March 7 by Touchstone), for the denouement to this anecdote and for entertaining detail into the staccato progression of his fantasy technique. It’s an enthralling read about his tutelage from a cat-shirt-wearing Canadian who goes by “Beep” to his hide-the-losses-from-the-Missus early months and honest self-appraisal about addiction to his expert evaluation as a “stone-cold, pathological gambler” and breakthrough into the ranks of the elite.

“The whole process made me crazy and definitely fundamentally changed the way I look at money,” Barbarisi said in an interview. “It’s impossible not to when you’re betting three-, four-thousand dollars a day, and it’s going up and down like that, there’s no way it doesn’t change the way you interact with it.”

“It wears me down, honestly,” he added. “I still do it and I enjoy it, but I have to force myself to get out of it sometimes.”

Around the same time that daily-fantasy leaders DraftKings and FanDuel announced their presence with an ad nauseam string of ads polluting television screens at an outlay of more than $200 million, Barbarisi signed his book deal. One stakes-raising catch: His application to take a book leave from the Journal was declined, meaning he was leaving his $70,000-per-year job and taking a real chance that his own wagers—and Barbarisi makes no pretense about the fact that daily fantasy “is obviously gambling”—would offset his loss of steady income.

Barbarisi would eventually clear about $100,000 in profit, an impressive sum by any measure, but doubly so when one considers his relevant experience with gambling: a beer-money-stakes weekly poker game with old colleagues at the Providence Journal and irregular casino trips to play blackjack on bachelor parties or in road cities. (Full disclosure: I used to populate many of the same press boxes as Barbarisi, an excitable reporter nicknamed “Wheels,” and once sat next to him at a blackjack table in Detroit’s MotorCity Casino after Hurricane Sandy struck during the 2012 World Series, marooning all New York-based ballwriters a couple extra nights in Michigan before air travel was restored.)

“I would have considered myself a standard 20s, 30s, average-guy gambler who would show up every once in a while and hopefully win a little money, most likely lose a little money,” Barbarisi said. “Then you’re out 100 bucks a couple hours later, and you leave.”

Though not much of a gambler, he was a shrewd gamer, even if all his relevant experience was recreational with nominal, if any, money on the line.

He did boast a knack for meticulous calculation (he once reached platinum status in two hotel chains and two airlines in the same calendar year) and numbers-laden gaming, through annual season-long fantasy baseball keeper leagues dating back to 2000 (when Todd Helton carried his team and ensured he’d play again) and a devotion to WhatIfSports.com’s simulation leagues. The latter pursuit, it must be noted, is especially nerdy—in some contests, one can fill rosters with historical talent to recreate past World Series or pit dynasties from different eras against each other or even mix-and-match players from all seasons in any way, shape, or form.

And that’s still barely scratching the surface. The Hardball Dynasty league creates a world entirely of simulated players in which real people take on the general manager role of developing a five-tier farm system, divvying up one’s amateur scouting budget into high school, college, and international subdivisions, among other highly detailed intricacies. It’s like fake fantasy sports. Barbarisi maintains four such franchises, all highly-successful, which is down from a high of seven concurrent leagues. (I would know, as I participate in a predominantly writer league for which Barbarisi is the commissioner; more than half the members are BBWAA cardholders.)

Most striking is that, despite this understanding of the sport and of the fantasy viewpoint, Barbarisi’s DFS track record in baseball was poor.

“I assumed that my baseball expertise was going to make me good at daily fantasy baseball,” he said. “I think it actually really undermined it. I think it was the exact opposite. It really screwed me up to have these narrative biases in place and pay attention to things like small-sample-size events and personalities and that kind of stuff whereas I really should have been just looking at the numbers.”

Hockey DFS attracted fewer field-crushing sharks, creating a more open path to the top, even if Barbarisi had no background knowledge and only those statistics at his disposal. “Coming in with no biases can help you,” he said. While his profession meant he consorted regularly with major leaguers, the only pro hockey player he knew was Cam Connor—a former No. 5 overall pick who finished his career with the Rangers in the early 1980s—because a young Barbarisi carpooled with Connor’s son to school. During the book project, his hockey-writing wife, Amalie Benjamin, transitioned from Bruins beat writer for the Boston Globe to a feature writer for NHL.com, though their perspectives of the sport rarely converged. Barbarisi might know a player’s advanced metrics like his Corsi; Benjamin might know the player’s high school coach.

“The weirdest thing for me,” she said, “about him getting involved in hockey was just watching him learn about a sport that he went from absolutely zero knowledge to knowing in some ways—and I can admit this—more than I do about some of the statistical analysis and these numbers I don’t always end up dealing with.”

At an NFL kickoff event hosted by DraftKings at Miami’s ritzy Fontainebleau Hotel during Week 1 of the 2015 season, Barbarisi struck up a poolside with a genial Canadian named Jay Raynor, who for four years had reigned as an upper-echelon professional DFS player. Their meeting was friendly, but fleeting, and perhaps fated to be forgotten if not for Raynor’s poor travel fortunes. His evening flight got canceled (after sitting on the tarmac for three hours), so he returned to the hotel at midnight where Barbarisi was among those still reveling in the sudsy merriment of the open bar. Their group would stay up until 7 a.m.

Raynor was impressed by Barbarisi’s manner — professional yet quirky, with an abundance of passion. “I was very impressed by the fire he had in his belly,” said Raynor, who goes by BeepImaJeep online. Appreciatively quirky himself, he once ordered five-dozen cat shirts and in the book bemoans his overeager purchase, wondering, “Like, when am I going to wear my forty-second-favorite animal shirt?”

Raynor says now that he had lost some of his drive before he met Barbarisi. “I think I was looking for something new,” Raynor said by way of explanation for accepting Barbarisi as an apprentice. The pair discussed tactics and even approach. Raynor dissuaded Barbarisi from “sweating” the games—DFS jargon for tracking the constant ups and downs—but the author couldn’t help himself. “It becomes like a mania,” Barbarisi said. “How do you divorce yourself from it? I can’t.”

Barbarisi was grappling with his own personal compass, candidly admitting compulsive behavior, writing, “I feel that part growing stronger with every day that I play high-stakes DFS hockey, every day that I get deeper into this.” He’d try to take some time off and pace himself.

In one tournament, Barbarisi led a top pro by three-tenths of a point when his players had finished their games. His opponent still had more than a period remaining of Avalanche defenseman Erik Johnson, who only needed a half-point for Barbarisi to lose a pricey purse. All Johnson needed was fire one shot on goal or block one shot on defense. Barbarisi would prevail, but not before Johnson shot a puck just two inches wide of the net.

“I was literally sitting there on the floor in front of the TV, like balled up watching this intently,” Barbarisi said, adding: “I was pacing back and forth and going crazy. I was an absolute mess. Every time Johnson was on the ice, I was completely terrified.”

Such eventual euphoria followed Barbarisi’s nadir of some $6,500 in losses and some self-doubt about his prospects of turning this around. Benjamin was often on the road for work and wouldn’t see Barbarisi’s front-of-the television gyrations. The money he loaded into DraftKings came from an account she chose not to access. Despite the shaky financial footing of journalism and her own natural frugality, Benjamin encouraged her husband to pursue this project because, she said, “this will be an adventure,” only wishing that he’d at least “end up somewhere in the even vicinity, if you can.”

“There were a lot of days where I was willfully ignorant,” Benjamin said, adding: “When he would have a big win, he would tell me. Which was kind of funny because I’d hear about the big wins, then I’d have a couple days where I wouldn’t hear anything and then a couple more days where I wouldn’t hear anything and then, all of a sudden, there’s a big win. In my mind, he was just even all those days that he wasn’t telling me about, not losing money.”

Raynor noted a pair of turning points in his pupil’s progression. After suffering a few losses, the two re-evaluated their lineup construction and recognized that the obvious plays (called “chalk”) were being underutilized compared to more contrarian options, as everyone in high-level game theory to have unique teams in competition. They subsequently built DFS lineups there were more “chalky than tricky,” he said.

Raynor grew to appreciate Barbarisi’s perspective, not only with his views on roster construction but also as they pertained to the DFS universe of likely opponents—game theory is a necessary bedfellow—and began “staking” Barbarisi, a common poker and DFS practice of helping cover entry fees as an investment to reap a portion of the winnings. That cost coverage can alleviate financial concerns and ensure appropriately aggressive tactics.

“That’s a very common thing,” Raynor said. “If people are losing money or playing higher stakes, oftentimes they’ll err on the side of being safe rather than the side of playing right.”

“Absolutely,” Barbarisi said. “That freed me up to trust myself.”

And the rest, it can be said, is his story.