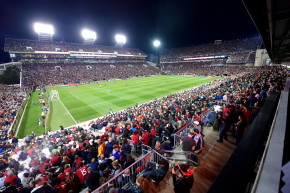 Atlanta United, one of two Major League Soccer expansion teams, took more than one L in its debut. The 2-1 loss to the New York Red Bulls was to be expected — after all, most experts expect the established Red Bulls to finish near the top of the Eastern Conference standings. But the bigger loss was of dignity, after a blatantly homophobic chant echoed from the stands throughout the opener.

Despite drawing over 55,000 visitors to Bobby Dodd Stadium, a few loud fans got undue attention for chanting “Puto!” (a Spanish-language gay slur) during the match. Viewers and fans bothered by the opening day homophobia, audibly captured on the FS1 broadcast, were quick to respond:

It may be Atlanta United's first match, but their fans are in midseason form with their "puto" chant. #ATLvNY

Some #AtlantaUnited fans are already trying to ruin a beautiful game by rolling out the "Puto" chant. @ATLUTD It needs to stop.

This isn’t the first publicized incident of distressing, bigoted fan behavior coming from nascent American soccer culture. Among other MLS clubs like New York City FC and the Red Bulls, there are small pockets of white supremacist fan groups often known as Ultras. It’s another disturbing export of international soccer culture; in 2016, FIFA penalized 11 different national leagues around the world for bigoted fan behavior, often including anti-gay chants. MLS has proven that they’ve attracted everything that makes worldwide soccer memorable — except the elite athletic talent.

The Atlanta United, to its credit, swiftly condemned the bigoted chanting. Team representatives released a statement to ESPN FC distancing the club from the attacks and warning attendees who harm the inclusive environment they hope to create.

“We strive to foster a positive, enthusiastic and inclusive environment for all fans, and inappropriate chants have no place at our matches,” the team wrote in a statement. “Atlanta United does not support or condone the use of offensive language. Fans found to be participating in this behavior will be subject to removal from the building.”

Atlanta, if you must sing horrible songs at your matches, stick to chants that offend the senses, not the values of your fellow fans.