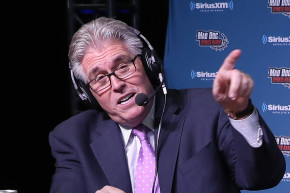 Mike Francesa Doubles Down On Sexist Bunk
By Robert Silverman

A female head coach would be nothing more a 'publicity stunt,' the radio host said

Mike Francesa, the perpetually wrong dean of New York sports radio who is set to retire (thankfully) this December, has a very loud and wrong take about women and sports

On Wednesday, a caller lobbed a big, dumb, meaty pitch right over the middle, asking Francesa if his sports-loving daughter might one day be a head coach. Francesa began angrily harrumphing that no woman would ever be qualified enough to land the gig, and any hire would be nothing more than a cheap publicity stunt, thus breaking the heart of his long-time, first-time friend on the other end of the line.

Then, as one does, Francesa took things further, saying a lady could never command any authority over a locker room packed with large beefy adult males, because they’re a lady person, you see.

Mike Francesa with an unfathomable display of sexism. Women shouldn't be anywhere near men's sports!

(Except for cheerleaders, presumably.) pic.twitter.com/2n2plZMLIF

“Do you know how difficult it would be on a female to manage 25 men? Or 50 men? Do you know how impossible that would be?… It wouldn’t be tough. It would be impossible. You’re going to tell me that you would think a woman could walk into an NFL team and coach as a head coach 15 assistants and 50-60 men?”

There are more and more women snagging coaching jobs in the four major sports, and NBA players, coaches, and officials think it’s a question of when, not if a woman will be calling plays. But for Francesa, the odds of it happening are “a million to one.” When Becky Hammon, a former WNBA pro and an assistant with the San Antonio Spurs was brought up by the caller as a qualified example, Francesa had a response: it’s only because a highly-respected man gave her cover.

On Monday, Francesa tried to walk back his remarks, kind of. If you don’t feel like grinding through 17 minutes of an ur-Lawn Guyland accent, here’s the crux of his argument: when he said a woman couldn’t coach dudes, it wasn’t a “chauvinistic” or “derogatory” statement; They just aren’t capable of handling rowdy boys, especially modern rowdy boys.

Mike Francesa responds to the backlash over his sexist comments from last week. It didn't get much better today.https://t.co/qetXZzKhYS

“There’s no saying that everybody has to do every single job. Some are better for some people. That’s all,” he said, via the New York Post. “That’s not being chauvinist. That’s not being Stone Aged. That’s just being reasonable. … It is difficult for men to run these rooms.”

Francesa also contradicted himself. After previously dismissing the University of Tennessee’s legendary head coach, Pat Summitt, as yet another worthy candidate, because it was “not her place,” five days later, she suddenly would be up to the task. Here’s a fun story about Summitt coaching Tennessee’s men’s team.

After WFAN sent a stream of additional callers his way, all of whom, shockingly, agreed with Francesa, he added, “There’s a level of common sense here that gets lost… Not everything is meant to be equal. There are some jobs where there are unique job descriptions for. That’s just the way it is.”

It is just the way it is, because for decades, women were viewed as inferior or weaker. And the idea of an openly gay player in sports was seen as beyond comprehension even a decade ago, as were African-Americans prior to World War II. The world changes, sometimes for the better, and reality will eventually drag Neanderthals like Francesa into the present, kicking and screaming, no matter how much spittle they deposit on a microphone.

In the meantime, perhaps we should all just take Gregg Popovich’s advice.

“I don’t pay attention to it,” Popovich said when he was told of Francesa’s comments on Hammon. “Because it’s nonsense.”