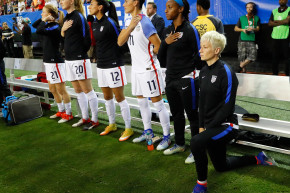 US Soccer Forces Players To Stand For The National Anthem

A solution to a non-existent problem as real problems fester

On Saturday, the United States Soccer Federation announced it will require members of the national soccer teams to “stand respectfully” for the national anthem. The change in policy was made more than a month ago by the USSF’s board of directors, but wasn’t made public until this weekend’s annual general meeting, held in Hawaii.

First reported by Fox Sports’ Stuart Holden, Policy 604-1 states: “All persons representing a Federation national team shall stand respectfully during the playing of the national anthems at any event in which the Federation is represented.”

New Policy added to @ussoccer bylaws: Players "shall stand respectfully during playing of national anthem @ which federation is represented" pic.twitter.com/fkVtCI1iHC

Though the U.S. Women’s National Team wasn’t specifically cited, last September, USWNT midfielder Megan Rapinoe followed Colin Kaepernick’s lead, taking a knee while playing for the Seattle Reign, a professional team in the National Women’s Soccer League. The owner of the opposing Washington Spirit tried to hijack her act of protest by keeping both teams in the locker room while the anthem was played.

Rapinoe persisted, taking a knee prior to a USWNT friendly against Thailand. In response, the USSF issued a statement which called playing for the national team a “privilege and an honor” that demands players consider what words like “liberty” and “freedom” really mean, particularly when the whole world is watching. (The USSF’s statement failed to mention that Rapinoe was doing just that by exercising her constitutional rights.)

“As part of the privilege to represent your country, we have an expectation that our players and coaches will stand and honor our flag while the National Anthem is played,” the statement read.

Now that expectation has been codified, though It’s unclear how the USSF would discipline anyone who dared to exercise their rights. According to Holden, USSF president Sunil Gulati said any future instances of free expression will be dealt with on a case-by-case basis, giving Gulati a Roger Goodell-like degree of power and latitude. What’s more, the February decision to update the policy was apparently made without consulting the players themselves.

USWNT players spokesperson on US Soccer leaders being at AGM in Hawaii instead of game & new rule requiring players to stand for anthem. pic.twitter.com/TxyT5loV76

USWNT head coach Jill Ellis thinks this is all fine and dandy, telling the Associated Press on Sunday following a 1-0 loss to England, “I’ve always felt that that should be what we do, to honor the country, have the pride of putting on the national team jersey. I said that previously. I think that should be the expectation.”

But for a real scorcher of a take, let’s turn to former USMNT defender and Fox Sports opion haver, Alexei Lalas, who not only demanded a hand be placed against a heart bursting with patriotic pride, but that every man woman and child wearing the U.S. crest should belt out a few verses.

U.S. Soccer has the right to do this. The question is, is it the right thing to do, and I say 100 percent. It is a privilege, it is an honor, it is a choice to represent your country, and it comes with responsibilities and expectations. And I know nowadays sometimes the national anthem is viewed as background noise or as a reminder to some about the problems, the real problems, that we have as a country. But I look at is as a unique moment, when we come together, we honor and we celebrate being citizens of the greatest country in the world, and I think it is a tradition that should be preserved.

I have been in stadiums where I stood for the anthem and everybody has booed, where flags have been burned, where I have been called every name in the book. I have never served in the military, I have represented my country on the field, and I know that pales in comparison to the men and women in our armed forces that serve our country and some that paid that ultimate price.

So damn right I am going to stand, I’m going to put my hand over my heart and I’m going to sing. And I believe that all U.S. national team players should be required to do that. Just because we live in the land of the free doesn’t mean that we are free to do anything that we want.

This is true. Sometimes, actions – protests, for example – have consequences. But for the umpteenth time, stop conflating standing for a terrible song with America’s armed forces. It’s cudgel to silence dissent and shut down any kind of meaningful dialogue about the reasons for Rapinoe’s or anyone else’s refusal to stand.

Meanwhile, the USWNT is still toiling on crappy, subpar playing fields and is currently locked in a battle with the USSF over what the USWNT claims are significantly lower wages than their much less successful male counterparts. The USSF has cobbled together its own accounting showing much less of a wage gap in response, but with the expiration of the collective bargaining agreement in December, a possible strike is still on the table. As striker Alex Morgan told the Guardian, “It wouldn’t be the first time women decided to strike … To force a change sometimes you need to stand up.”

Being told when and where to stand by the USSF will surely ease any lingering resentments and help bring both sides back to the bargaining table.