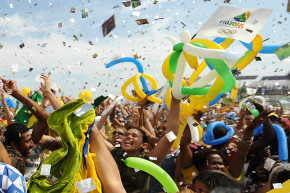 What a surprising turn of events

In addition to everything else that went wrong with the Rio de Janeiro Olympics this summer, massive bribes were paid out in order to influence the voting process.

According to a report in Le Monde, French prosecutors have obtained evidence showing that the fugitive Papa Massata Diack, a now-banned International Association of Athletics Federations consultant and the son of the similarly disgraced ex-IAAF president and member of International Olympic Committee, Lamine Diack, was paid a total of $2 million by a prominent Brazilian businessman three days before the vote was held in Copenhagen.

Documents sent by U.S. tax authorities to the French courts show that on September 29, 2009, three days before the crucial vote in Copenhagen, a company called Matlock Capital Group sent $ 1.5 million to Pamodzi Consulting, Papa Massata Diack’s company based in Dakar. At the same time, an additional $500,000 transfer from Matlock Capital Group was made to another bank account held by Diack in Russia.

Investigators were able to establish that Matlock Capital Group, a holding company located in the British Virgin Islands, managed the interests of a certain Arthur Cesar de Menezes Soares Filho. Nicknamed “King Arthur,” or “the king of subcontracting,” for years, Mr. Soares has held construction contracts with the state government of Rio amounting to several hundred million euros.

Le Monde also reports that Soares was a close associate of Sergio Cabral, a member of the Brazilian Democratic Movement Party and former governor of the state of Rio de Janeiro. Cabral was arrested in September 2016, charged with accepting $65 million in bribes in exchange for infrastructure contracts that were doled out prior to the Games.

On the day that the vote was held, Diack also transfered $299,300 to another offshore tax haven called Yemi Limited, a holding company mentioned in the Panama Papers that was controlled by Frankie Fredericks. Fredericks is a four-time silver medal-winning sprinter from Namibia and a current IOC member who in 2009 was a “scrutineer” for the voting process. That is to say, his job was to ensure a fair and transparent vote.

Reached for comment, he emailed Le Monde to say, “The payment has nothing to do with the Olympics.” According to Fredericks, the funds were sent to fulfill a two-year old contract, and the fact that they arrived on the day of the vote is just a coincidence and the result of “pressure” that he’d been exerting on Pamodzi consulting to pay its debts. Fredericks ended his communication with Le Monde by threatening them with possible legal action

“I reserve all my rights against you and your newspaper, and will not hesitate to initiate formal legal steps if you publish anything defamatory about me,” he said.

Mario Andrada, a spokesman for Rio 2016, told Le Monde, “The elections were clean. Rio won by 66 votes against 32, it was a clear victory. We are 200 percent confident in the fact that we did nothing outside the rules.”

Papa Massata Diack declined to comment on Le Monde’s reporting, but did wish them, “Good luck with your article!” Papa Massata Diack is currently considered an “internationally wanted person” by Interpol and has been charged by the French authorities with multiple counts of bribery, money laundering, and corruption.

A 2016 World Anti-Doping Agency investigation found that both members of the Diack family, along with an army of bag men and other corrupt cronies, turned the IAAF into a de-facto mob racket which covered up failed doping tests and stole millions. According to a report in the Guardian, Papa Massata Diack has also been linked to allegations of bribery regarding the 2020 Games in Tokyo.

Following publication, the IOC released a statement backing up Frederick’s explanation for the odd timing of the payment, promising that he would comply with an investigation that the IOC Ethics Commission will be conducting into the allegations.

With regards to Papa Massata and Lamine Diack:

The IOC is “Partie Civile” to the ongoing procedure initiated by the French Judicial authorities against former IAAF President Mr Lamine Diack and his son Papa Massata Diack, the then marketing consultant of the IAAF. The IOC remains fully committed to clarifying this situation, working in cooperation with the prosecutor. This cooperation has already led to the fact that Mr Lamine Diack, who was previously an IOC Honorary Member, has not held any function within the IOC since November 2015. The IOC will be contacting the French Judicial authorities again in order to receive information on which the article in Le Monde appears to be based.