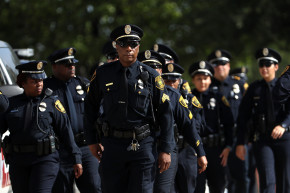 Hopefully this is just the beginning

No matter how much Baylor University has tried to obstruct justice for the students allegedly raped by their football players, the university can’t seem to escape the controversy. Now, the Texas Rangers—the criminal justice unit, not the baseball team—are in the early stages of an investigation into the self-beleaguered institution. From Matthew Watkins at the Texas Tribune:

Tom Vinger, a spokesman for the Texas Department of Public Safety, said the state’s top criminal investigative unit is working with a local prosecutor’s office “to determine if further action is warranted.” He didn’t say what specifically the Rangers were looking into, but the confirmation comes two days after a Democratic lawmaker wrote a letter asking Gov. Greg Abbott to request an investigation.

That lawmaker, Rep. Roland Gutierrez, D-San Antonio, said he wanted to know whether the university obstructed justice when students reported that they had been raped by other students.

“We know women were shamed and coerced to keep quiet,” Gutierrez said

Baylor, already at risk of losing millions from the Big 12 if they can’t prove they’ve cleaned up their act, is also being investigated by the Department of Education over possible civil rights violations of Title IX. And then, women’s basketball coach Kim Mulkey gave students and Bears fans the right to knock a concerned parent in the face if they suggest their daughter might be better off in a school without a recent rape epidemic. Whether that materially affects the Title IX investigation is debatable, but it probably wasn’t the best PR move for the school.

Baylor wisely sided against Mulkey’s request that they grant a special fist delivery to any facehole spouting lies against the beloved Bears, instead pledging “to extend our full cooperation with the Texas Rangers surrounding the issue of sexual assaults that occurred within our campus community several years ago,” in a brief statement.

Though we’re admittedly skeptical, we’ll see if pressure from the state’s top investigative unit and lawmakers forces Baylor to overhaul their policy and culture.