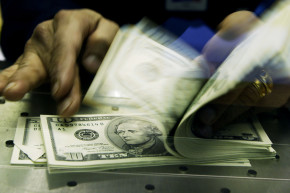 The days are ticking off until St. Louis voters will decide whether or not to bequeath $60 million to the consortium of very rich dudes seeking a brand-new Major League Soccer stadium. With April 4 just around the corner and a recent poll by the Remington Research Group showing a tight race with 36 percent in favor, 39 percent opposing, and 25 percent still undecided, SC STL has settled on how they’re going to sell this to the public: local taxpayers won’t be charged a dime, so just give the money to us.

There are two propositions on the ballot. Voting “yes” on Proposition 1 would create a 0.5 percent sales tax to to fund an expansion of the city’s light rail system. If that passes, then, and only then, would the votes for and against Proposition 2, which would charge an additional 0.5 percent use tax on all out-of-state business purchases, be counted. Should SC STL prevail, St. Louis would then fork over $60 million, using the expected $4 million per year that would be generated to repay a bond offering.

But because this is a business tax, SC STL is claiming that St. Louis residents aren’t paying for the stadium at all. SC STL vice chairman Jim Kavanaugh has been tweeting variations of that talking point over the last month along with a nifty logo and campaign slogan which reads, “City residents pay zero unless they visit the stadium.”

The facts are clear and compelling this is good for St. Louis. The time is now! Vote yes #mls2stl #spread the word pic.twitter.com/eHb6MxgAcT

Momentum is building and Supporters are rallying. The time is now #mls2stl pic.twitter.com/oGZB5SSfE1

“That seems like a flat-out lie to me,” French told the Riverfront Times in response to Kavanaugh’s tweets and similar claims made on SC STL’s website. “That is completely misleading and dishonest. That is not how taxes work… Regardless of where the money came from, once it gets into the city coffers, it becomes the money of the people. It is completely misrepresentative to suggest that city people won’t be paying this. The tax money is the people’s money.”

Here’s how taxes actually work and how the people’s money might otherwise be spent, via the Riverfront Times:

If voters turn down the stadium funding in Proposition 2, the new Use Tax revenue doesn’t disappear. Instead, that money — estimated at $4 million annually — would likely help fund the city’s Affordable Housing Trust Fund and efforts to demolish vacant buildings and bolster the police department. The stadium plan would take away revenue that could be used for other things …. leaving a greater share of the burden on, yes, city residents.

“That is money that would go directly towards much-needed services,” said French, who voted against the stadium proposal when it came before the Board of Aldermen. “They’re asking voters to redirect it to their private venture.”

Yes, that’s exactly what they’re doing. What’s more, for all of SC STL’s rosy talk about increased tax revenue generated by the stadium and the addition of 450 permanent jobs—jobs at the stadium, mind you, which are not exactly high-paying gigs—they never mention that a tax on business will impact the local economy and certainly could be passed on down to the consumer. And that’s before we take into account the city’s ongoing debt crisis.

You’re paying for this stadium, St. Louis, misleading marketing campaign or not, particularly when a very rich man tells you it’s free.