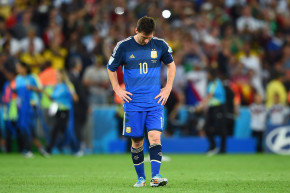 Argentina’s soccer season is in jeopardy following a call for a general strike by the union over months’ worth of unpaid wages. During a meeting of the Argentinian Football Association (AFA) on Friday, the Argentine Footballers’ Union (FAA) secretary general Sergio Marchi announced that  the second half of the Argentine Primera Division, previously scheduled to begin on February 5 and subsequently pushed back until March 3, would not commence until players could be assured that they’d receive the money they are rightly owed, which, in some cases, dates back four months.

“The Argentine Footballers’ Union (FAA) considers conditions are not right to begin the second part of the tournaments organised by AFA and which had been scheduled for (March 3) in the case of the first division,” Marchi said in a statement.

“So we announce that the players will withhold their work and not take part in official matches … since they are owed salaries that in some cases go back four months.”

Despite coming to an agreement with the government to accept $25.21 million the FAA clamed the AFA was owed from a program of government-sponsored, free televised soccer matches, Fútbol Para Todos, the union maintained that those funds wouldn’t cover the entirety of the debt that has been accumulated, nor would the funds be distributed prior to the start of the season.

On Tuesday, the FAA reiterated that all sanctioned matches would be put on permanent hold until these issues could be resolved.

“The irresponsible executives of many clubs, responsible—once more—for the massive debt with the footballers, continue with their indolence and indifference, not responding to the claims,” the union said in a statement.

The question of television dollars arose due to austerity measures imposed by President Mauricio Macri, who announced that he would be ending Fútbol Para Todos. Created by the previous president, Cristina Fernández de Kirchner in 2009, the program was scheduled to last for 10 years and allowed poor Argentinians who could not afford to pay exorbitant cable fees to watch soccer matches in their entirety.

Amidst mounting debt, Macri had railed against the program, claiming it enabled corruption and deeming the current state of Argentine soccer “a terminal crisis” which would no longer be kept afloat by the government’s largesse. (Kirchner was also criticized for using Fútbol Para Todos to air government-friendly propaganda.)

According to the Economist, the cost of airing Fútbol Para Todos this year was projected to come in at approximately $161 million and would have provided one fifth of the annual revenue for Argentina’s top teams.

The broadcast rights have since been opened up to private companies with ESPN, Fox/Turner, and MediaPro having already submitted substantial bids, but the sale has been put on hold until the FAA and the AFA can come to an agreement. That is, assuming this year will see professional soccer played in Argentina at all.