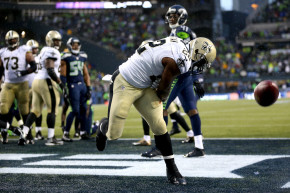 Nightclub Rejects Black NFL Players For Being ‘Too Urban’

Apparently, there might be racism in London, even if you play for the New Orleans Saints

New Orleans Saints running back Mark Ingram alleged on Twitter that popular London nightclub Cirque Le Soir denied him and his teammates from entering the club for being “too urban,” whatever that means, which is probably nothing. Definitely not racist.

Ingram, who is listed at 5’10”, said that the four players and their two friends (making six “too urban”-ites in total) were also dismissed in part for being “6 big guys” in a collection of Twitter posts. According to Ingram, none of the people in his group were taller than 5’11”, which again, I’m certain there’s a reasonable explanation. No need to jump to conclusions here. Maybe you’re the real racist.

Still, the nightclub, self-described as London’s “most A List and decadent circus,” drew a line that Ingram and his friends found curious, which Ingram documented in a succession of tweets:

Everyone in England has been amazing so far!!! This was our first #TooUrban encounter entire trip! I ❤️ England! #TooUrban https://t.co/QbmMtkWcza

Cirque Le Soir posted an official response to their Twitter account at 11:34 a.m. Eastern. The club denied dismissing Ingram and his group as “too urban.” They did express some regrets, however. No, not personal remorse, never that, just regret that anyone would suggest “anything malicious” in their turning away of Ingram and his friends. They also reiterated their door policy, which discourages “casual dress code” and “male heavy entourages.”

A quick scan of Cirque Le Soir’s Instagram account makes it difficult to discern what counts as “casual dress.” For example:

One of these blokes is rocking a gray hoodie and a trucker hat. The other is English singer-songwriter Conor Maynard. Both are wearing jeans and neither appear to be using a classy “inside voice.” Their expression reads, “There’s no behavior inappropriate enough to ever expose me to discrimination against my race, gender, or religious beliefs.” In other words, they seem kinda, y’know, casual.

Vocativ reached out to Cirque Le Soir for clarification on their dress code but we have yet to receive any comment. In the meantime, we won’t accuse them of hiding behind an intentionally nebulous, selectively applied dress code, which gives them just enough plausible deniability to pretend they didn’t exclude six black men from their establishment on the basis of their race.