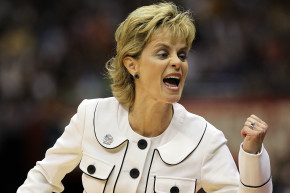 Women's basketball head coach Kim Mulkey called for violence on anyone who speaks ill of Baylor, because of course

Ah, Baylor University. When it’s not scrambling to resist an actual investigation of the alleged 52 cases of sexual assault by 31 members of the football team over a four-year period, officials are still offering up some seriously tone-deaf public statements.

During Saturday’s senior day game, women’s basketball head coach Kim Mulkey grabbed the mic and decided this was the time and place to invoke threats of violence against the university’s critics or anyone who might have second thoughts about enrolling their daughter.

“If somebody’s around you and they ever say, ‘I will never send my daughter to Baylor,’ you knock them right in the face,” Mulkey said. “Because these kids are on this campus. I work here. My daughter went to school here. And it’s the damn best school in America.”

”And I would send my daughter here. And I would pay for anybody’s else’s daughter to come here. I work here every day. I’m in the know. I’m tired of hearing it. This is a great institution. The problems we have at Baylor are no different than the problems of any other school in America. Period. Move on. Find another story to write.”

#Baylor is the "Best damn school in America" according to Kim Mulkey, and she says it's time to stop dragging its name through the mud. pic.twitter.com/gkFULTnEBw

On Sunday, Mulkey tried to walk back those comments in an interview with espnW. She claimed that she didn’t literally mean slugging someone who might express a negative sentiment about Baylor. Rather, it was a “poor choice of words” uttered in the heat of the moment. What she intended to say was that pro-Baylor advocates should be forceful in their rebuttals. Okay.

“My point was, ‘Please don’t paint, with a broad brush, the women at Baylor,'” Mulkey said. “I didn’t think about what I was going to say. I looked at my players, and the little girls and the women who are cheering for them. And I spoke with a lot of emotion.”

No one is throwing dirt at the women who attend Baylor. As to whether Mulkey intended to come across as if she just wants the story to go away, she says her comments were directed at one specific journalist whose reporting Mulkey feels has been overly aggressive in their reporting, though Mulkey did not name the reporter in question.

What’s more, victims of sexual assault at Baylor who might believe Mulkey is trying to silence them should see her as an ally, according to Mulkey.

“Not only do I sympathize with victims, I am angry about the way victims were treated at this university,” Mulkey said. “It is horrible, horrible anytime someone does not take care of a victim. Even one sexual assault is too many. Nobody is dismissing what happened here. I want us to get to the bottom of it.”

But as Jane McManus noted at espnW, Mulkey has a vested interest in carrying water for Baylor. All things considered, a top recruit might not want to sign a letter of intent if she thought administrators and coaches still were far more concerned with the university’s reputation than a claim of sexual assault. Whether or not Mulkey wants to punch a concerned parent, what student would think they could confide in Mulkey now?

And Mulkey does a history of sweeping issues she sees as harmful to Baylor recruiting under the rug, according to Baylor alumnus and WNBA star Brittney Griner. In 2013, Griner told ESPN The Magazine, though it was never said in so many words, Baylor coaches made it clear to her that it would be best if she remained in the closet.

“It was a recruiting thing,” Griner said. “The coaches thought that if it seemed like they condoned it, people wouldn’t let their kids come play for Baylor… “It was more of a unwritten law [to not discuss your sexuality] … it was just kind of, like, one of those things, you know, just don’t do it. They kind of tried to make it, like, ‘Why put your business out on the street like that?'”

Another Baylor women’s basketball player, Emily Nkosi, wrote at Outsports.com that while she didn’t see Mulkey as a homophobe, the prevailing cultural attitidues made being open about her sexuality impossible. (Until 2015, Baylor’s bylaws conflated homosexuality with sexual assault, requiring punishment for both.)

I had no idea what coach Mulkey would actually say if I told her I was gay in 2005, but I had enough information from my life experiences to be afraid. I was afraid of what everyone would think or do if they found out I was gay, not just her.

Even if there are Baylor officials working to effect real change, as McManus reported, Mulkey’s comments and her tepid attempt at clarifcation make it seem as if the long-standing toxic culture at Baylor hasn’t really changed at all.