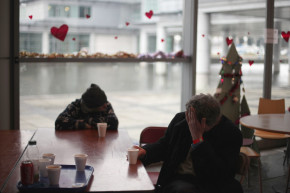 St. Louis’s on-again, off-again attempt to give away millions in taxpayer dollars to a consortium of rich dudes so they can build a Major League Soccer stadium will be put up for a vote on April 4.

For those that haven’t been following along, the backers of a possible MLS expansion team, SC STL, claim that without public dollars, there’s no way they’ll be able to build a $200 million stadium. Without a firm plan to pay for the stadium, the odds of snagging one of the upcoming expansion slots would take a serious hit.

At the time, the incoming governor, Eric Greitens, made it perfectly clear that the state would not play ball, so SC STL started sniffing around for politicians who would back this grift. A proposal that would have paid out $80 million collapsed in January, but despite a failure to rework the language in time to place a new referendum on the ballot, a judge pulled their legislative fat out of the fire, and the stadium deal was back on the ballot.

Now, in order for SC STL to get $60 million in redirected property taxes and out-of state business taxes plus a parcel of free land, a majority of voters will need to approve two separate measures. (The second would increase sales taxes by 0.5 percent and go to improving and expanding the city’s light rail system.).

Got all that? Okay. Seemingly benign language about “property taxes” might make you think the plan is to soak a few wealthy swells or at least ask deep-pocketed homeowners to pay a little more each year. Not so much.

Those selfsame property taxes are currently used for… wait for it… ensuring that poor people have a decent place to live. The still-underfunded Affordable Housing Trust Fund has received $4 to $4.5 million each year in local use taxes since 2011, falling below the $5 million that was supposed to be dedicated to affordable housing.

According to advocates, there’s zero chance they’ll get the money the promised if the stadium becomes a reality, let alone see any needed increases. (City Alderman retain a large degree of discretion when it comes to allocating funds, and the current crop of mayoral candidates have promised that, stadium or no, they’ll up the amount. Then again, they’re politicians running for elected office.)

Here’s how those funds were spent during the most recent fiscal year. Via the St. Louis American:

About $1.2 million went to homeless prevention and shelters, and another $790,000 went to transitional housing.

About $1.3 million went to new building developments for affordable housing. And the remainder went to home repairs, rent and utility assistance and other programs to keep people from foreclosing on their homes.

Oh yeah. St. Louis should totally set that money on fire, because soccer. Those in favor of the bill are trotting out the same easily-disproved stats, touting an additional $4,000,000 from the 0.5 percent use tax increase to defray the bond costs and a few hundred permanent jobs that will be created at the stadium.

Here are the people in St. Louis who would probably prioritize further housing expenditures over a new stadium for millionaires:

24 percent of African Americans spend more than half of their monthly income on rent and utilities, according to the Equal Housing and Opportunity Council. The waiting list for Section 8 housing in St. Louis is years long. And for every 100 extremely low-income families, there are only 21 housing units that are in their price range in St. Louis city, according to the Forward Through Ferguson report. This means that these families can easily become homeless at any time.

Even if the trust fund had been receiving the full $5 million per year since 2011, it still wouldn’t be enough to transform the city’s problems with affordable housing, [Molly Metzger, an assistant professor at the Brown School of Social Work at Washington University] said.

“But it’s enough to transform the lives of many families,” Metzger said. “We can’t have strong communities without affordable housing.”

There’s not a ton of data available, but according to a January poll conducted by the Missouri Times and Remington Research Group, 61 percent of respondents want nothing to do with this dumb scam, 22 percent favor it, and 17 percent had no opinion either way. Here’s hoping the polls are right.